Perceived personal safety may be crucial for older adults to age in place with a positive outlook; however, safety varies based on where one lives and the resources one has to maintain social supports and effective caregiving.
Download PDF
Download Data

Perceived personal safety may be crucial for older adults to age in place with a positive outlook; however, safety varies based on where one lives and the resources one has for maintaining social supports and effective caregiving. This section of the report describes elder abuse and crime, including perceptions and experiences affecting the physical safety of older adults. Key findings include:

According to the National Center on Elder Abuse, elder abuse includes “any knowing, intentional or negligent act by a caregiver or any other person that causes harm or a serious risk of harm to an older adult.”1 Most definitions of elder abuse include physical, sexual, emotional and financial abuse, as well as neglect and self-neglect.

According to the U.S. Department of Justice, nationally at least 10% of adults age 65 and older will experience some form of elder abuse each year.2 However, elder abuse is often unreported, suggesting these rates could be higher.3 Family members are the most common perpetrators of abuse.4 5

Older adults who experience social isolation, cognitive disabilities (including dementia and Alzheimer’s),
or physical disabilities are at an increased risk for abuse.9 10 According to key informants, older adults in Central Indiana may experience multiple forms of elder abuse concurrently, such as neglect and other forms of abuse from a perpetrator.11

Provider concerns include lack of support to prevent abuse

According to an interview with Indiana’s Adult Protective Services (APS), Indiana is unique in its lack of a public guardianship program and lack of regulation around who is eligible to become a guardian. The interviewee also noted underfunding of APS as a challenge—in 2019, a total of 42 investigators served the entire state of Indiana. Even though this number is an increase from the 30 full-time investigators in 2016, this understaffing makes it difficult to effectively address the needs of a large population of older adults. Indiana’s APS is also the only such service nationally that does not operate as a social service agency, instead serving as a justice system to resolve disputes between abusers and partnering with county prosecutors.12 This means that APS investigators do not have direct access to social services such as emergency placement for adults in life-threatening situations. Instead, they must refer to outside agencies, which often have waiting lists for permanent placement options.13 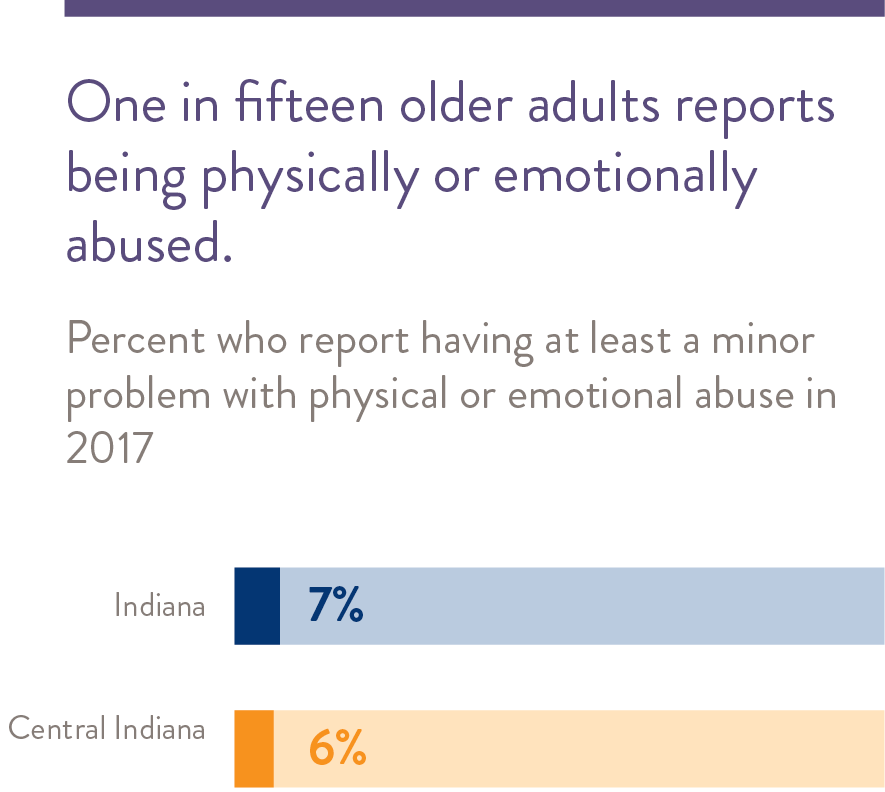 The present-day social service system is limited in its ability to assist the growing older adult population amid increasing financial abuse.15 While there are some volunteer-based guardianship services available for older adults in the state, only half of the counties in Central Indiana are served by one of these entities.16 In Marion County, the Center for At-Risk Elders (CARE), provides emergency guardianship services to those who need a guardian and lack alternatives. However, according to interviews with service providers, the demand for services is rising at an almost unmanageable rate. In addition to service gaps for guardianship, national research also notes a lack of multicultural frameworks to prevent elder abuse in communities of color, as much research has focused on older adults who are White and middle class.17

Between 2013 and 2020, the Office of the Indiana Attorney General received 40,839 consumer calls that included complaints of fraud or scams from adults age 60 and older. Roughly one third of these originated from Central Indiana counties.18 This is likely a gross underestimation, as a large proportion of complainants did not report age data.19 According to 2017 CASOA data, across both the state and Central Indiana, one fifth (20%) of older adults reported that being a victim of a fraud or a scam was a least a minor problem during the past year. This represents a statewide increase of six percentage points between 2013 and 2017.20 21 To learn more about factors that can put older adults at a higher risk of being victims of fraud or scams, please read ’Highlighting Equity’ on page 5.9.
22

Older adults participating in focus groups reported feeling targeted and preyed upon through mailings, robo-calls, telephone scams, identity theft and fraud.23 Some experienced a large volume of mailings and phone calls designed to defraud them of their resources. Specifically, they discussed concerns about being targeted for financial scams in which they are asked to provide personal information and cash.

Focus group participants, especially those with lower incomes, were concerned about who would continue to help them manage their finances, as some trusted their children, while others either lacked supportive family members or did not have anyone they could trust. 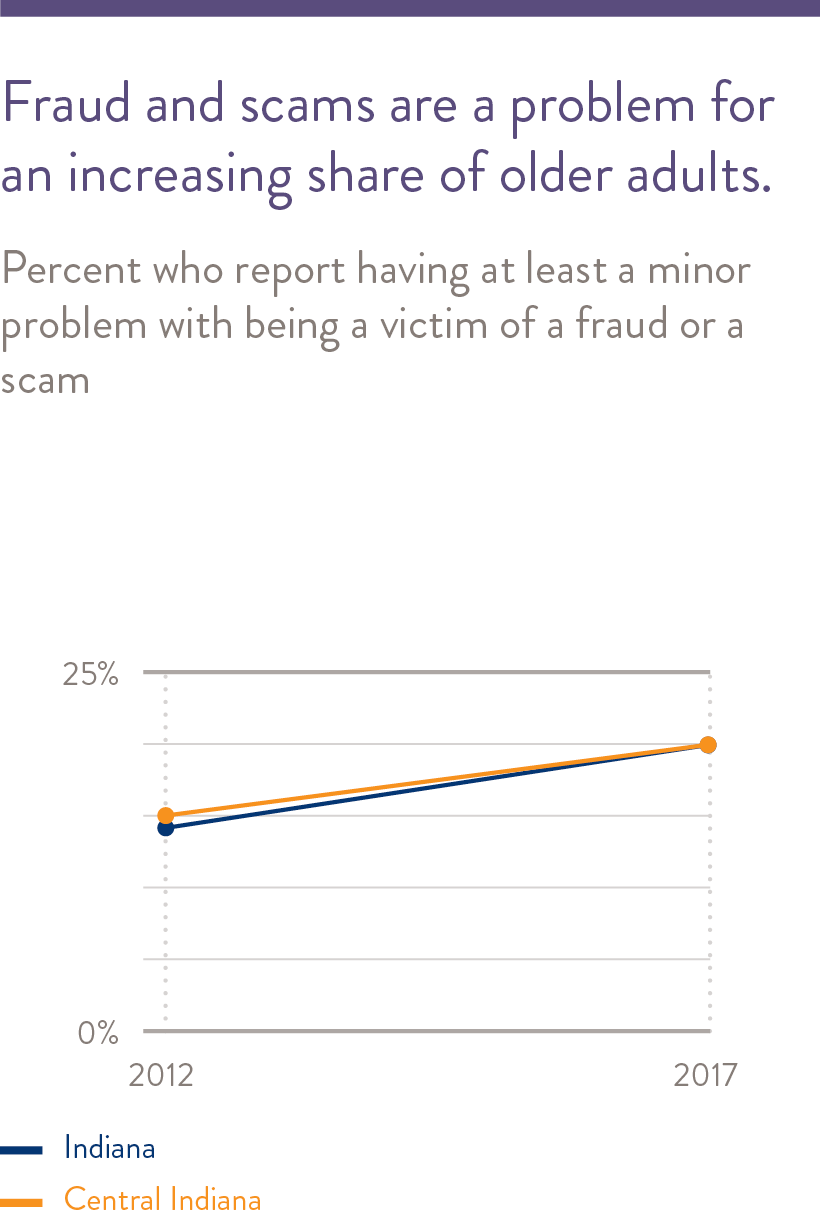 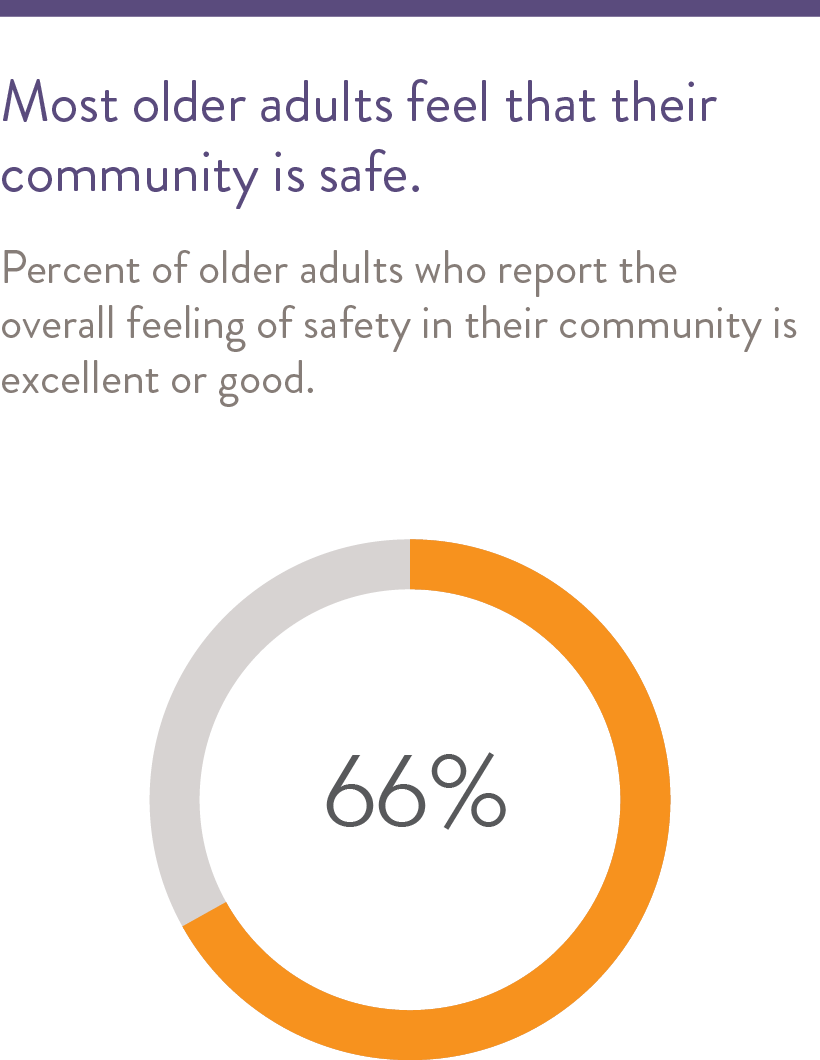 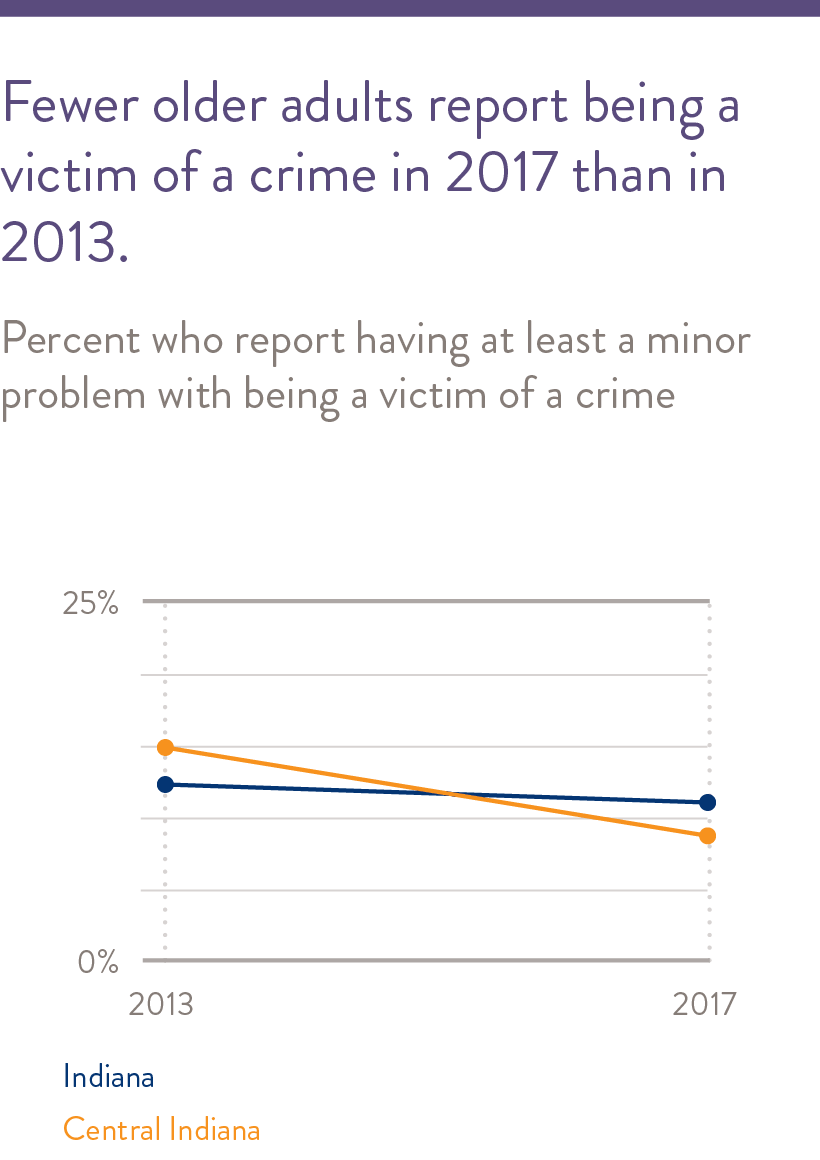 Even when older adults are not direct victims of crime, neighborhood crime around them can have a negative effect on older adults, who may not feel safe or may be fearful of leaving their homes. One key informant shared that older adults in her community have a fear of telling others that they are home alone, out of fear of their homes being robbed. Additionally, fear of crime is associated with lower social participation among older adults.37

During several focus groups conducted to inform this report, older adults living in Marion County noted that crime in their neighborhoods and around their homes prevents them from conducting regular business or enjoying where they live. Specific crimes mentioned include robberies, drugs and gun violence. One individual who lived near a running path opted to run laps around her block instead, out of fear of being robbed or attacked. Another person who relied on walking and the bus for transportation mentioned carrying mace and a knife for protection. Another participant reported her grandson was murdered in September 2019 during a robbery. Addressing crime is important to the sense of security and quality of life of older adults living in an area, and it disproportionately affects different Indianapolis neighborhoods. 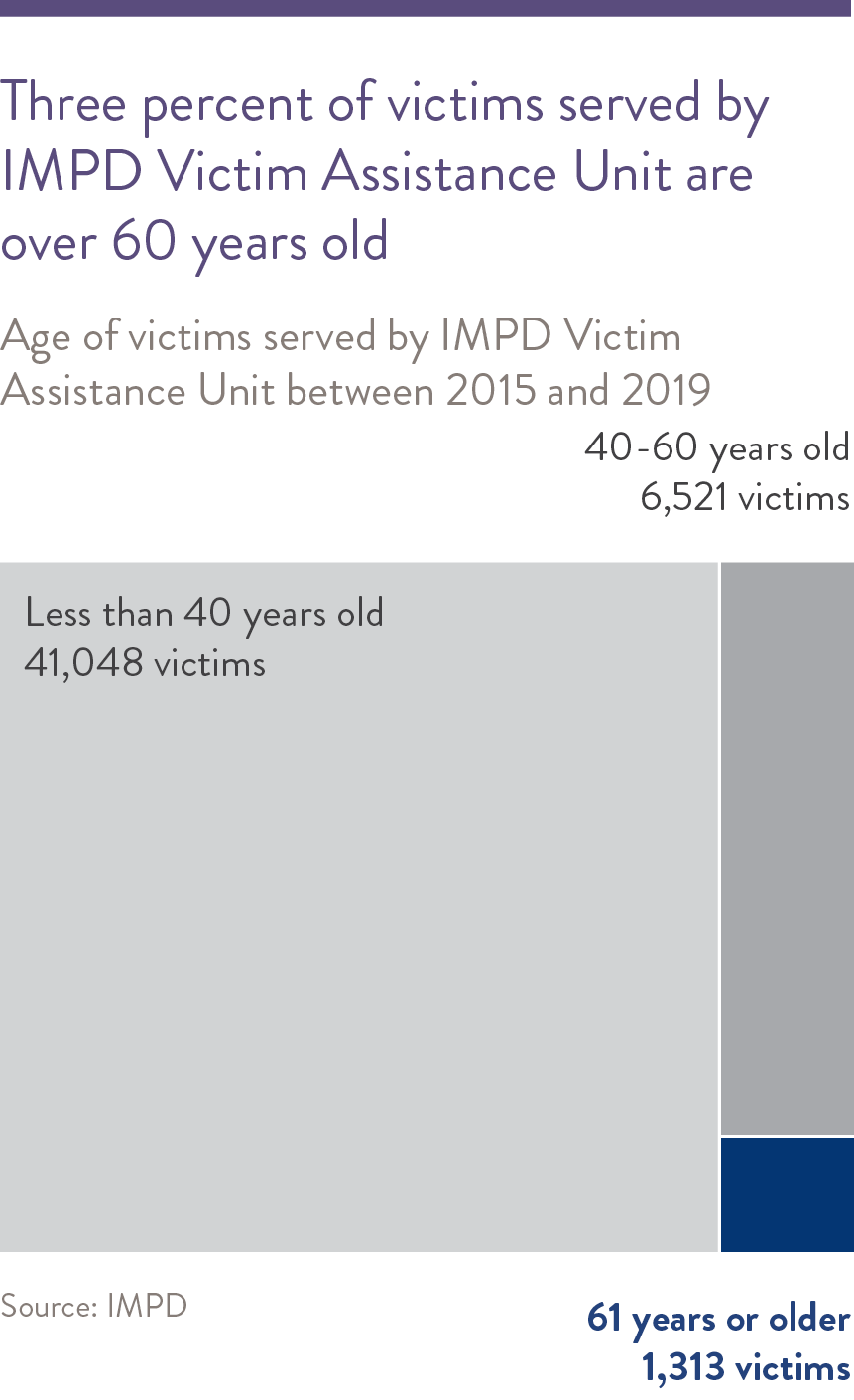 What factors put older adults at a higher risk for fraud victimization?

Conflicting data exists about whether certain older adult populations are at a higher risk for fraud victimization. However, research has shown that older adults in general are more vulnerable to fraud and scams.

Older adults with mild cognitive impairment or dementia are more likely to make impaired financial decisions and are less able to discern when fraudulent activities are occurring.40

Older adults with lower income and low financial literacy have a higher susceptibility to fraudulent schemes.41

This is of particular concern for older adults, who have been found to have high levels of financial illiteracy. This can impact their ability to recognize scams. In one study, over two-thirds of older telemarketing fraud victims said it was difficult to identify fraud when they encountered it.42

Older adults who are socially isolated are at higher risk for being victims of fraud. These individuals often have strong urges to connect with others, which can make them easy targets for financial abusers. Fraudsters may build “friendships” with these older adults in a ploy to win their trust and exploit them financially. Additionally, older adults who live alone are often easy targets due to less contact with family members.43

Many older adults who are fraud victims do not report it, due in part to a lack of knowledge on where or how to report.44 Even when there is information available on reporting, there may be a lack of clarity or ease in the process. For example, the Indiana Attorney General’s website lists four different organizations and contact numbers for reporting financial exploitation, depending on the type of scam and individuals involved.45 Similarly, even when elder fraud is reported, there are not always adequate resources to investigate or solve these cases. A 2016 IndyStar investigation found that elder financial abuse cases reported to APS were often the lowest priority to investigate due to the organization’s limited resources. One APS official shared that as a result, they did not open some financial exploitation cases until up to seven years after the exploitation had occurred.46 Low levels of reporting and prosecution can further embolden scammers to continue targeting older adults, as there are often few consequences.