Housing is an important issue among older adults (those age 55 and older), as housing costs comprise a significant proportion of household expenses and can cause financial stress for those adults about to experience or already experiencing a decline in income.
Download PDF
Download Data

Housing is an important issue among older adults, as housing costs comprise a significant proportion of household expenses and can cause financial stress for adults about to experience or already experiencing a decline in income. This section of the report discusses housing affordability, homeownership, housing instability and barriers to obtaining housing in Central Indiana. Key findings include:

The Burden of Housing Costs

Housing affordability affects the ability of older adults to live stably and age in place across a variety of living quarters. Housing affordability affects older adults, from those who own their own homes to those who rent or experience housing instability. Because housing and housing-related costs represent a large proportion of the typical household budget, these costs can place a great deal of financial stress on older adult households. See the Financial Stability section of this report to learn more about older adult household expenses.

Older adults of color in Central Indiana are disproportionally more likely to be housing cost-burdened. According to 2019 data, Black and Latinx older adults are significantly more likely to be housing cost-burdened than White older adults.11 People of color are also disproportionately experiencing the impact of COVID-19 on their finances, putting them at higher risk for increased housing cost burden or housing instability as the pandemic continues.12

The cost of housing maintenance also affects the affordability of housing. Older adults in focus groups reported not being able to maintain their homes or properties and may not be able to afford to hire someone to do this maintenance for them. Some feel uncomfortable continually asking children or relatives for help cleaning gutters, mowing lawns, trimming trees or making other repairs. Finding home and property maintenance businesses that are trustworthy also affects access to these services. Those with Internet access use resources such as the Better Business Bureau to ascertain the trustworthiness of a company. One woman noted that she asks people from church to help her, because if they do a good job at these tasks at church, they will do so at her home. 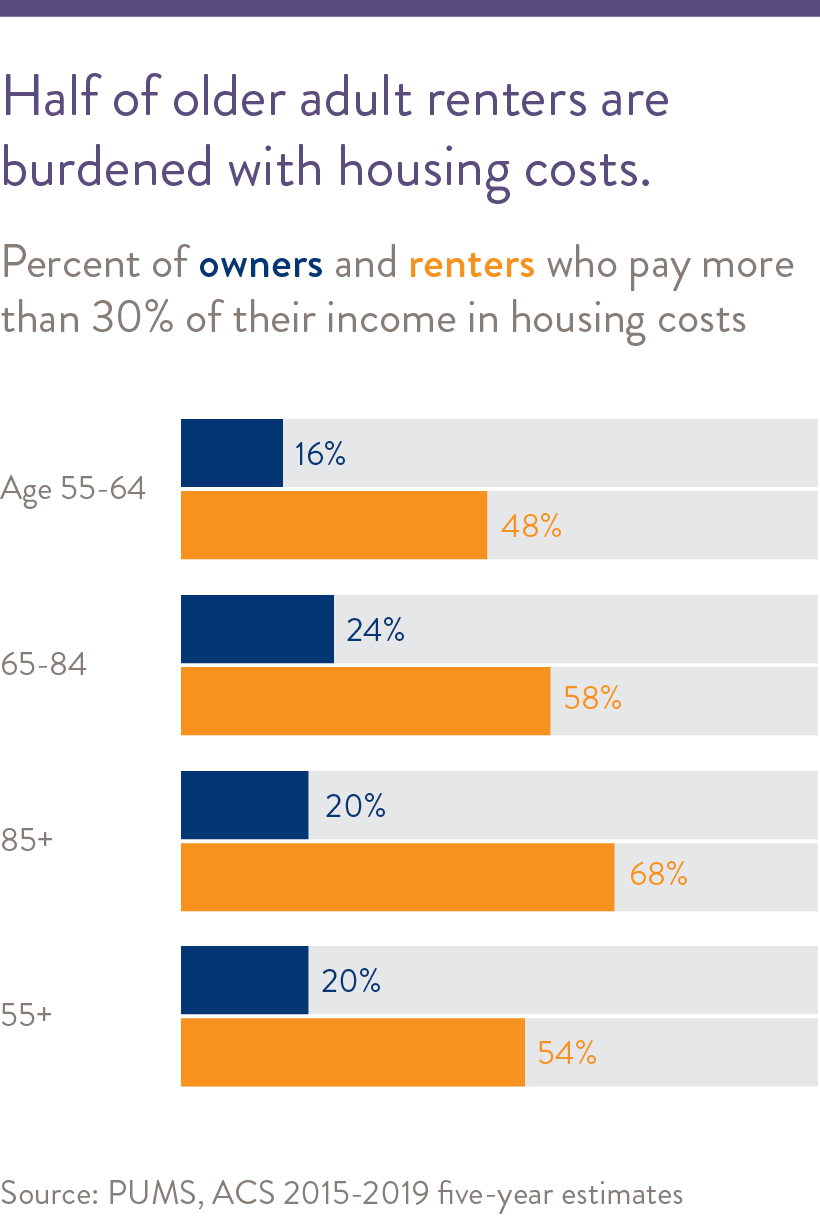 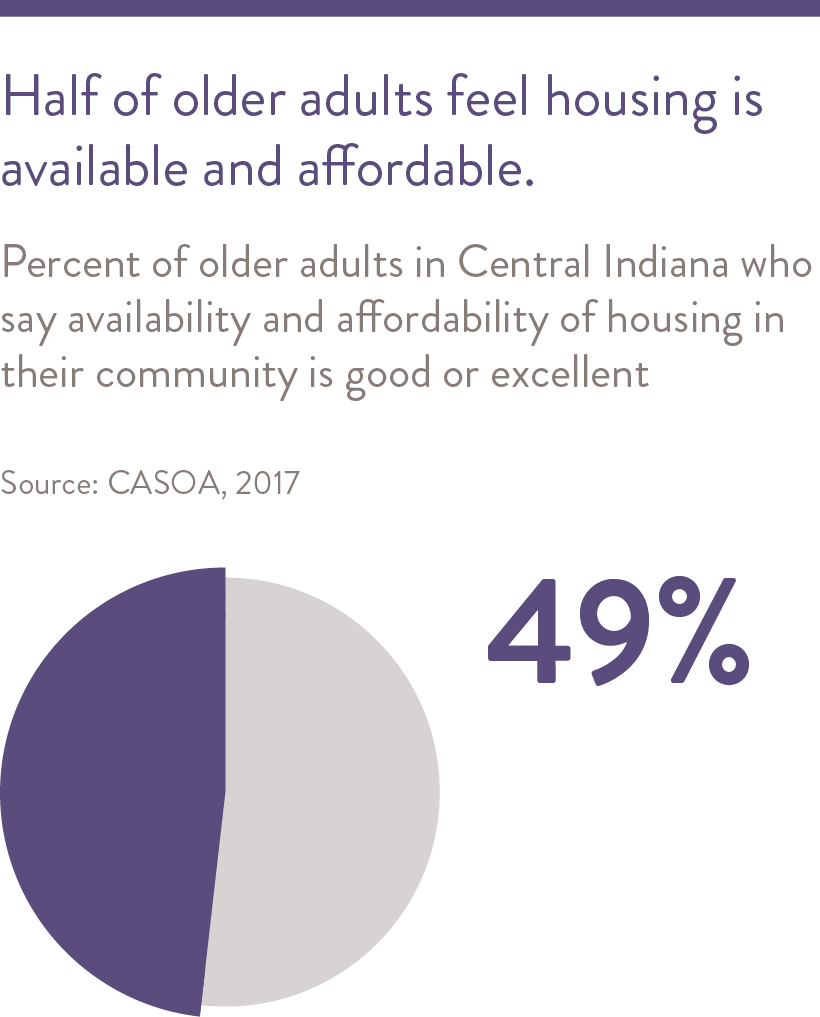 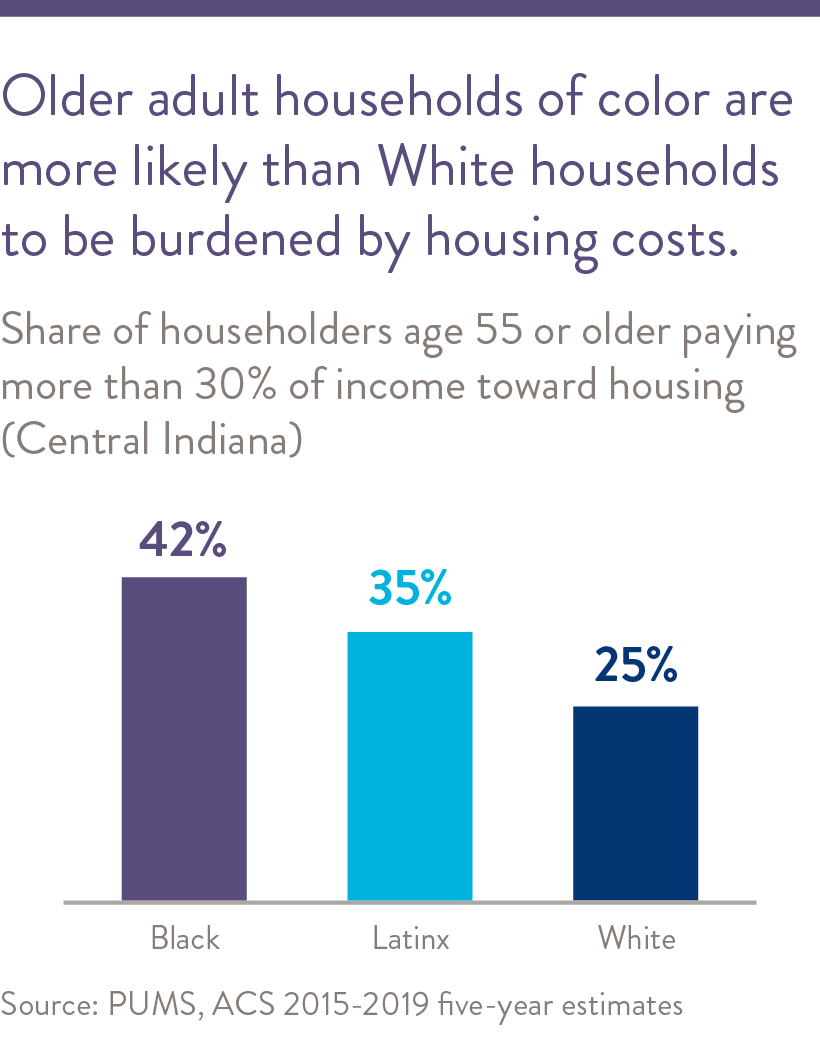 The Community Assessment Survey for Older Adults (CASOA™) identifies the strengths and needs of Indiana adults age 60 and older, including in the Central Indiana region. In 2017, only half (49%) of Central Indiana respondents indicated that the availability of affordable quality housing in their communities was either excellent or good for those in their age group.16 17 While this does not represent a significant decrease since 2013, the state of Indiana experienced a two percentage point decline in reported affordability since 2013, with only 42% of respondents reporting excellent or good availability of affordable quality housing in 2017.18 19

One means of ensuring a quality supply of affordable housing earmarked for older adults is by using federal and local resources to leverage or directly finance the construction of affordable housing, typically multifamily rental housing. Federal programs related to these are often funded or guaranteed by the U.S. Department of Housing and Urban Development (HUD), along with funding through programs such as the Low-Income Housing Tax Credit (LIHTC) program, the Community Development Block Grant HOME program, bond financing guaranteed by municipalities, states or the federal government.20
Federally subsidized affordable rental housing for older adults is typically limited to those age 62 and older, and is sometimes also available for people with disabilities, regardless of age. To qualify for an affordable unit, a household must fall at or below a specific income level based on household composition.21 Central Indiana is home to a total of 95 HUD-funded or financed affordable housing developments, totaling 6,204 units.22 Marion County is home to the largest number of units, 3,962, while Johnson County has the highest concentration of units, at 136 units per 1,000 eligible older adults. Hancock County is home to the fewest number of affordable housing units (194 units), while Hamilton has the least number of units per 1,000 eligible older adults, at 40 units.23 24

Although most older adults in Central Indiana own their homes, renters comprised 22% of older adult households in 2015-2019.25 Twenty-four percent of younger-old households live in rental units, compared to 19% of middle-old and 34% of oldest-old adults. A focus group at a low-income housing community for older adults indicated that their experiences were quite different from older adults who own homes. They reported substantially more financial instability and limits in housing options. Additionally, they expressed greater reliance on resources provided through the housing community for transportation, recreation, and food than other older adults. Rental units for older adults can be subsidized through federal funding mechanisms, such as Section 42 housing, but key informants report these have long waiting lists.26 Additionally, many older adults must be at least 62 years old to be eligible for certain types of affordable housing units. A lack of eligibility creates a gap in services, particularly for the younger-old, which one key informant reported as “living in filth and squalor” because of the low quality of the units that they can afford.

The socioeconomic status of a neighborhood is related to residents’ health and social outcomes. Adults living in high-poverty neighborhoods are more likely to experience chronic illness, mobility issues, cognitive impairment and accelerated aging, regardless of income level. Because both Latinx and Black older adults are more than twice as likely as White older adults to live in high-poverty neighborhoods regardless of income, the former face increased poverty-related risk of chronic illness, limited mobility, cognitive impairment and accelerated aging.27

Older adults participating in focus groups reported that in some Indianapolis neighborhoods, changing demographics over time led to a reduction in property values, while others reported that gentrification and subsequent rising property values led to unaffordable property taxes.28 According to the older adults, both phenomena resulted in many long-term residents moving away from these neighborhoods. In 2017, 20% of older adults surveyed in Central Indiana reported that having enough money to pay their property taxes was at least a minor problem during the past year, representing a 6 percentage point improvement since 2013.29 30 In comparison, a quarter (25%) of older adults statewide faced the same challenge.31 32 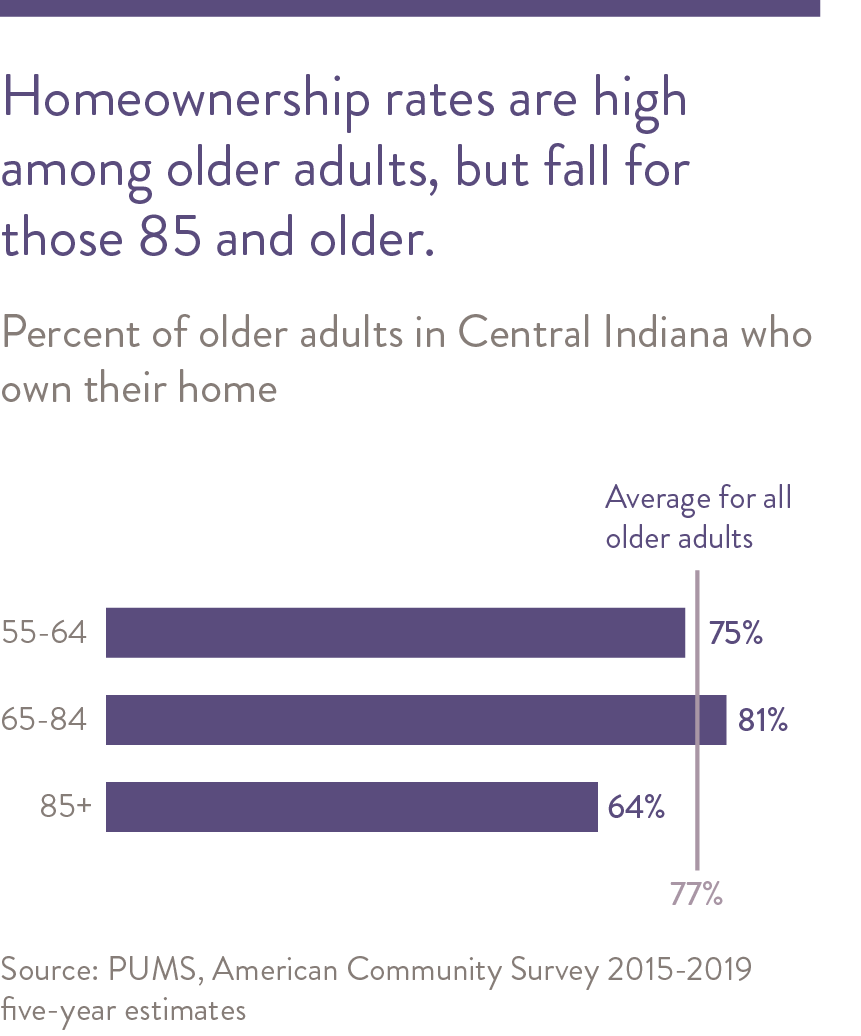 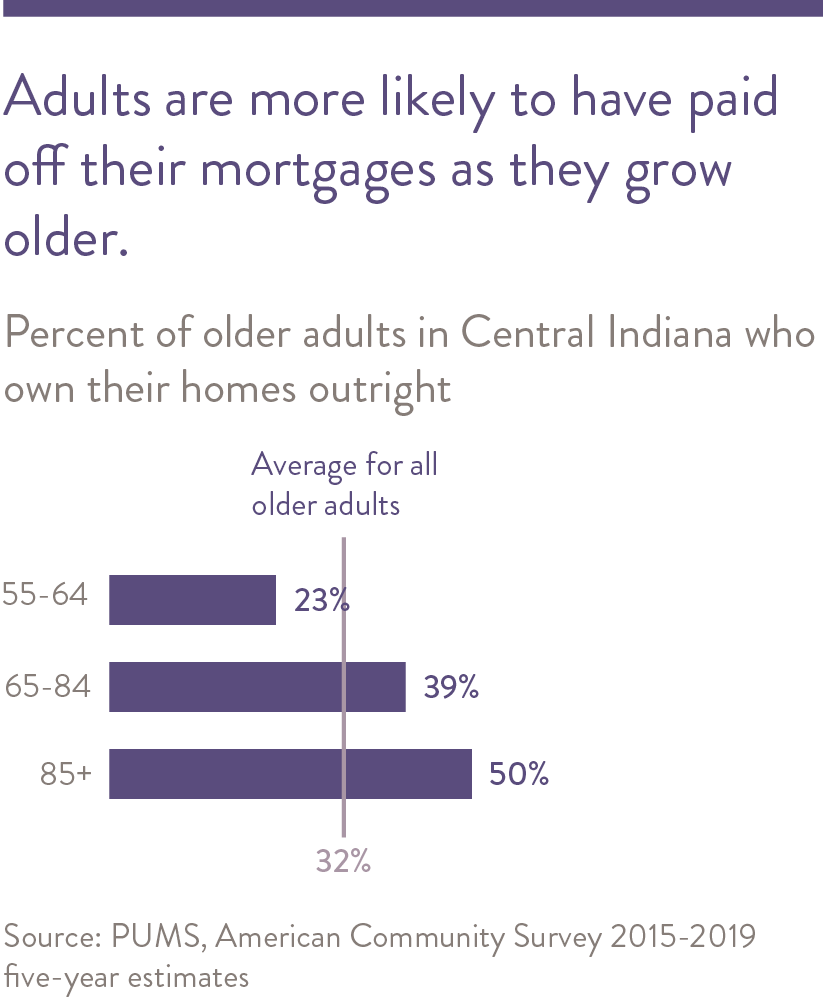 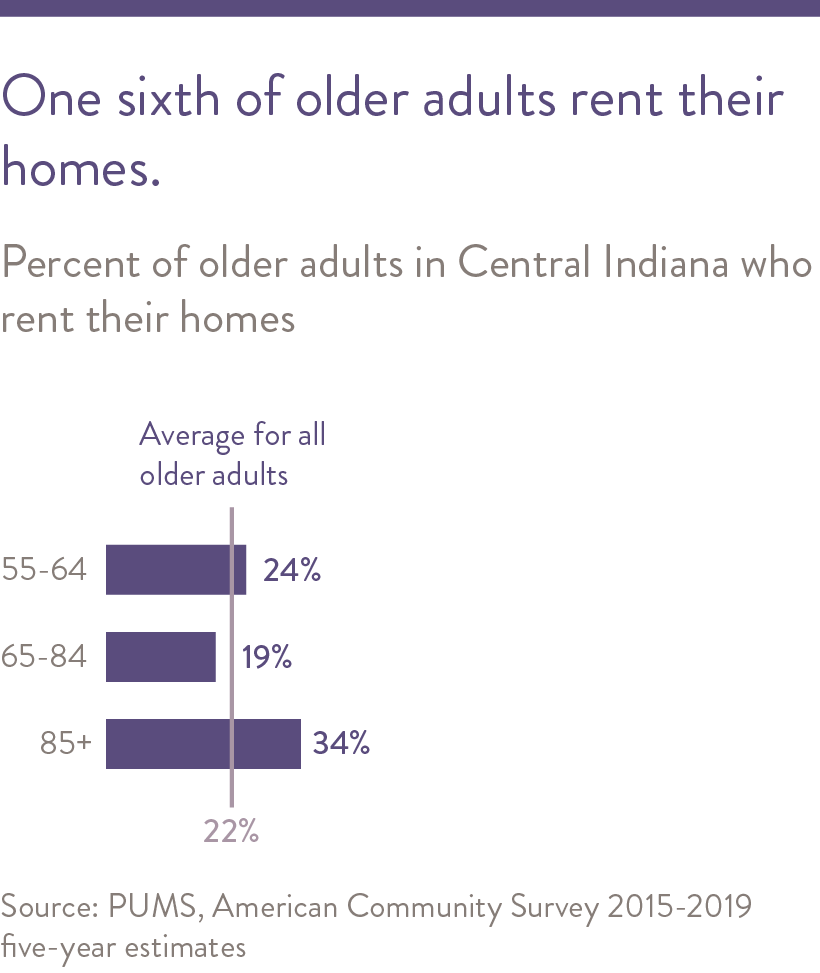 Key informants interviewed for this report noted that older adults with criminal histories find it particularly difficult to find rental housing that will accept them. Specifically, the U.S. Fair Housing Act does not include formerly incarcerated people as a protected class, including those who have been arrested but not convicted.40 Landlords may perceive a criminal history as a risk to a rental community’s safety, which is a permitted form of discrimination. This is particularly problematic because not having an address makes it difficult for formerly incarcerated people to maintain consistent employment and income, and older adults with criminal histories tend to be disproportionately Black, Latinx, or have disabilities, adding to existing housing inequities. Nationally, transgender older adults also experience barriers to housing. According to the National Center for Transgender Equality, 19% of transgender older adults have been denied housing because of their gender identity and 11% have been evicted due to transgender discrimination.41

Lastly, older adult focus group participants across multiple income groups do not believe most assisted living communities are affordable, and do not anticipate being able to live in one. Most of these participants live in their own homes or in rental units. Key informants note that the inability to purchase a new home and relocate forces lower-income older adults to remain in their existing neighborhoods. 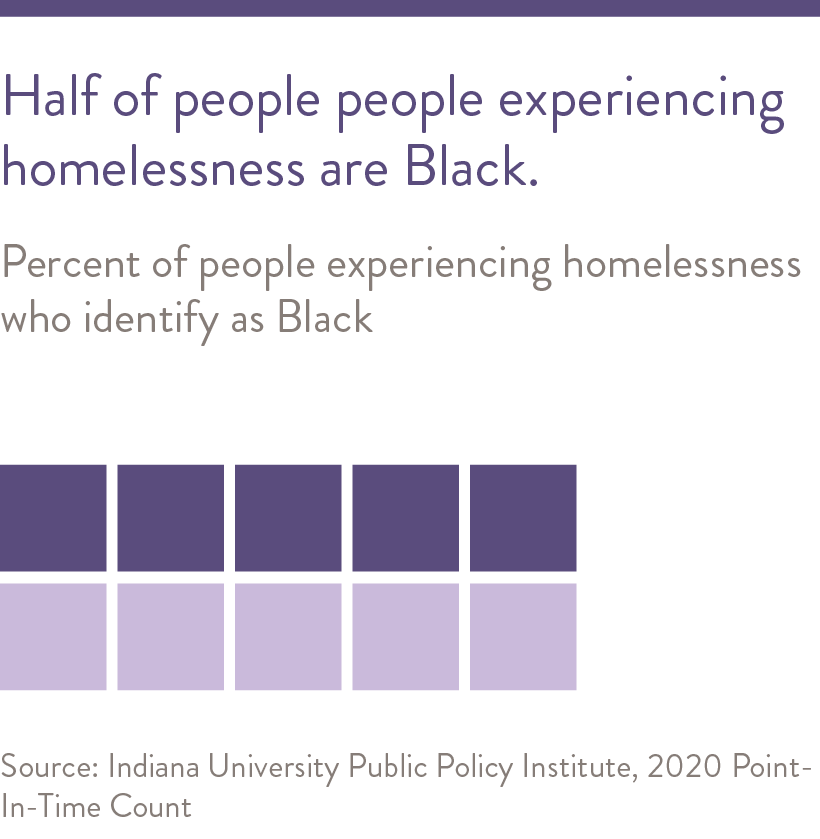 In the United States, older adult veterans are three times as likely to experience homelessness compared to older adult non-veterans. Below are some systemic factors that can lead to high levels of homelessness among this population.

Due to their military service, veterans have a higher risk of both TBIs and PTSD, which are considered some of the most substantial risk factors for homelessness. One study found that veterans with opioid use disorder are ten times more likely to be homeless as the general veteran population.43

A report by the Government Accountability Office found that VA services are not often specifically targeted at older veterans experiencing homelessness. These individuals often have more complex health issues, such as ambulatory challenges or cognitive issues, which VA programs cannot fully address. For example, some older veterans experiencing homelessness may need care provided by assisted living services, but the VA does not cover veterans’ rent at these facilities, making this type of care unattainable for older veterans who may need it.44 45 46 47

In 1991, the U.S. military began the Transition Assistance Program (TAP), to assist service members with understanding U.S. Department of Veterans Affairs (VA) benefits and how their military-related skills could be transferred to civilian employment.48 However, a survey of U.S. veterans found that nearly half of respondents felt that the military did not prepare them well for transition to civilian life, on either a financial, emotional or professional level.49 Older adult veterans who left the military prior to TAP’s creation may have received less transitional support than those who did complete the program.

Policy Factors: Some veterans are barred from receiving VA benefits

Veterans who receive a punitive discharge from the military (such as a bad conduct or dishonorable discharge), are often ineligible for federal benefits through the VA, including compensation, pension, education or home loan benefits.50 Veterans not receiving a punitive discharge, but an ‘other than honorable’ discharge, may also be excluded from some benefits, such as the HUD-VASH program, which combines a HUD Housing Choice voucher with VA Medical Center case management.51 For example, a service member who tests positive on a drug test may receive an other-than-honorable discharge, meaning they may be barred from receiving the support and services they need once they leave the military. Overall, the refusal of benefits to certain veterans based on their discharge status can create significant barriers in obtaining proper housing, health care and employment necessary to prevent and end homelessness.52

2-1-1 is a helpline service providing information and referral to health, human, and social service organizations. In 2019, there were 7,610 calls to 2-1-1 from Central Indiana adults age 55 and older requesting assistance with finding affordable housing, paying for housing or paying for utilities. Of these calls, 2,563 were associated with at least one housing-related need, and 5,395 with at least one utility-related need. Senior housing information and referral was one of the 10 types of assistance most requested by or for older adults. Almost half of the calls requested electric service payment assistance, and nearly one quarter requested gas service payment assistance.
The map below represents the number of housing-related calls per 1,000 older adults across Central Indiana. The ZIP codes with the greatest rate of calls are in Marion County, in neighborhoods with larger populations of color and higher poverty rates or in areas with recent gentrification.53 These include Indianapolis neighborhoods to the Near East, West, and North of downtown, and the Far Eastside of Indianapolis. 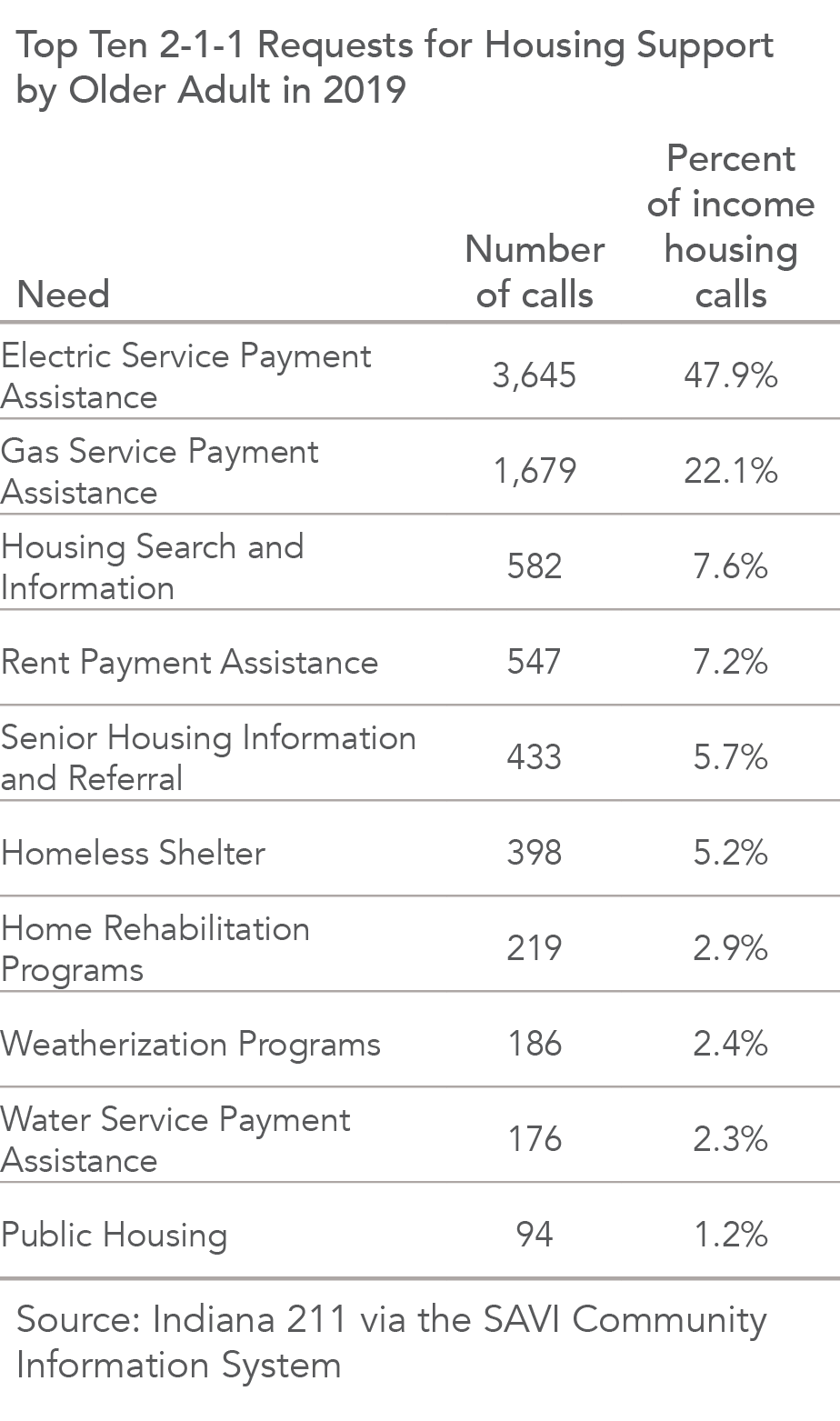