Many older adults deal with chronic diseases, like cancer and cardiovascular- related issues, increased disability, and increased susceptibility to lower- respiratory problems. These conditions can be exaggerated by social stressors and lifestyle factors. This section of the report discusses mortality rates, rates of disease, notable changes and disparities in the health of Central Indiana older populations. Key findings include:

Mortality in Central Indiana has fallen since 1999, but leveled off in the mid-2000s.

How to read this chart. These statistics are only estimates. The estimate itself is shown as a dark line. The shaded area around that line represents the confidence interval. We are 95% sure the true value lies in that shaded area.

Rates of death from accidents have been steadily increasing for the younger-old in the last decade, such that for both Indiana and the nation, they now constitute the fourth and third leading causes of death, respectively. Accidental injury deaths and suicide rank seventh and fifteenth respectively.

Because of the decline in chronic disease deaths, there has been an overall decline in the early death rate in Indiana over the past two decades.

The order of leading causes of death are similar between Blacks and Whites across all older adult age groups and the decline in the early death rate occurred across both the Black and White older adult populations.6 There is not sufficient data about other races to make similar statements.7

According to the CDC, disability is defined as any condition of the body and mind (impairment) that make it more difficult for a person to do certain activities and interact with the world around them.8 The types of disabilities include vision, movement, thinking, remembering, learning, communicating, hearing, mental health and social relationships.9 The prevalence of disabilities in the older adult population provides a measure of the impact of chronic conditions on quality of life, including whether living a longer life necessarily translates into living an active and independent life.10

In Indiana in 2018, the prevalence of disability for those age 65 to 74 and those age 75 and older was 26% and 48%, respectively.11 Ambulatory disability is the most common type of disability in the older adult population in Central Indiana, followed by hearing disability. No rate of disability appears to have significantly changed between 2013-2018.

Disability can be conceived as a gap between individuals’ capacities (physical, cognitive and sensory ability) and their performance in daily activities and participation in social life.  These physical and social barriers result in loss or limitation of opportunities to participate in normal life of the community on an equal level.12 This functional disability in older adults is routinely measured through their ability to perform activities of daily living (ADL).13 14, 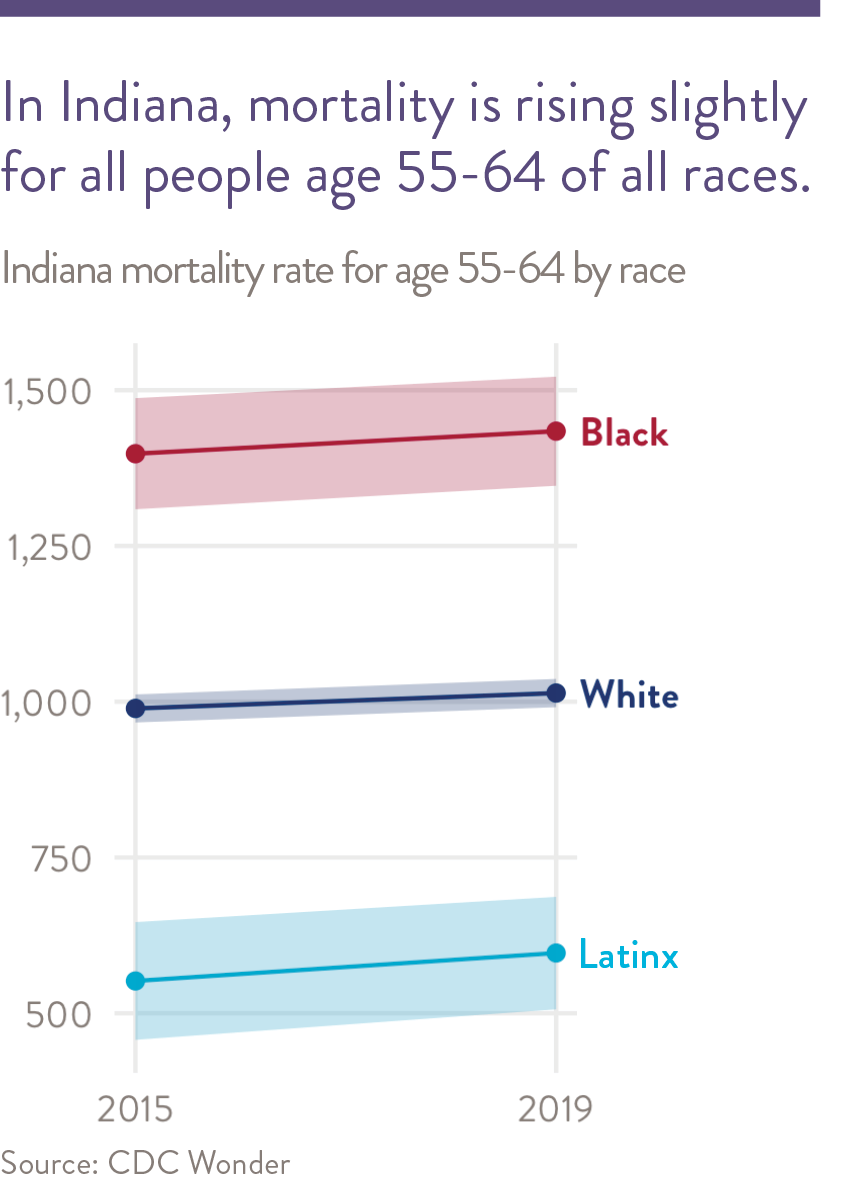 Racial and ethnic disparities persist across most age groups.

Falling mortality rates for cancer and heart disease have driven early deaths down.

The health needs of older adults are much different than those of younger age groups. Common chronic conditions affecting older adults are often accompanied by functional disability, making it more difficult to participate in typical daily activities and interactions and potentially reducing their quality of life. Despite some improvement in self-management of symptoms, treatments and lifestyle choices, the rates of some chronic diseases still are trending in the wrong direction.

Clinical depression is a common and serious mood disorder. It causes severe symptoms that affect how one feels, thinks and handles daily activities, such as sleeping, eating or working. Statewide, rates of depression for Hoosiers age 55 and older remained relatively stable from 2011-2019, the rates for age 55-64 were consistently higher than that of age 65 and older. For 2019 these rates were 22% and 15% for age 55-64 and age 65 and older respectively.16 The rates are higher for women as compared to men (29% and 15% respectively 2019).17

These numbers likely underrepresent the magnitude of clinical depression among the older adult population due to underreporting. Proper diagnosis of depression in the elderly is of utmost importance. Undiagnosed or misdiagnosed depression can eventually culminate in other mental health and social problems, such as decreased cognitive and social functioning and increased suicide rates. Although women are more likely to be diagnosed with depression,18 men are more likely to commit suicide and are less likely to seek mental health help as compared to women19 and are less likely to be appropriately diagnosed.20 Men over age 55 commit suicide at five to six times the rate of women. Nationally and in Indiana, since 1999, suicide rates have been increasing for both men and women, although the rate of increase for women is lower.21

In the presence of proper diagnosis of depression and depressive symptoms, many antidepressant medications are safe and well tolerated in older populations22 and considered first line of treatment.23 Older individuals also benefit from receiving therapy from a mental health professional (psychiatrist, psychologist or a counselor) as an effective method of treating depression.24 However, a growing body of evidence suggests widespread undertreatment of depressive disorders in the older population.25 Treatment approaches that actively elicit and consider the preferences of the older adult may help to address this.26 While screening, diagnosis, and treatment of depression is critical, the treatment in the older adult populations comes with its own risks. Polypharmacy, the prescription of multiple drugs to an individual, can lead to increased risk of adverse drug events, drug-interactions, medication non-adherence and reduced functional capacity.

What to look for in this chart:

Are rates changing over time? Within each gender group, each row is a five year time span. Move down the rows to move forward in time.

“Alzheimer’s disease is an irreversible, progressive brain disorder that slowly destroys memory and thinking skills, and, eventually, the ability to carry out the simplest tasks.”27 It is the most common cause of dementia28 among older adults, but it is not a normal part of aging.29

Racial and ethnic disparities in drug overdose deaths persist.31   Since 2012, the rates of drug overdose deaths in Indiana have generally been higher for Blacks than for Whites. To learn more about factors that influence higher rates of opioid-related deaths among Black older adults, please read ‘Highlighting Equity’ below.

Opioid use disorder (OUD) is defined as a problematic pattern of opioid use that leads to serious impairment or distress. The use of prescription opioids is considerably higher in older age groups due to multiple chronic conditions leading to chronic pain. As such, this age group is at a higher risk of developing OUD due to availability of prescription opioids and increased vulnerability due to overall health conditions.  While deaths due to prescription opioids contributed to 32% of all the opioid overdose deaths, this was a decrease of 14% from 2017 to 2018.

In Central Indiana, opioid overdose has resulted in increasing death rates in age 55 and older across all races from 2009 to 2018. However, the death rates are consistently higher for Blacks when compared with Whites. These racial disparities were also observed throughout the state.

Alzheimer’s death rates are increasing quickly among those 85 or older.

Between 2015 and 2017, the opioid death rate for Black adults age 55 to 64 nearly doubled in large metro areas.32 Below are some factors that have influenced this increase in opioid use and death rates among this population:

The “War on Drugs” movement that began in the 1980s created severe penalties for nonviolent drug offenses, which resulted in disproportionate rates of incarceration for people of color in comparison to Whites. This, as well as other numerous historical events, have sown mistrust within Black communities toward the healthcare and criminal justice systems and created fear that seeking treatment for opioid use will result in arrest or incarceration.33

Studies have shown that Black older adults who experience chronic pain may be untreated or under-treated for their pain,34 and are significantly less likely to be prescribed opioid medications for pain compared to White patients. This disparity may be attributed to underestimating Black patients’ self-reported pain, as well as stereotyping and discrimination by providers.35 Although this lack of access to prescription opioids created somewhat of a protective effect for Black patients against prescription-opioid misuse, it also led to an increase in people of color accessing illegal versions of these drugs, which are often laced with synthetic opioids such as fentanyl.36 An analysis of opioid deaths in large metro areas found that 70 percent of opioid-related deaths among middle-age Blacks were tied to synthetic opioids, compared to only 54 percent of White and 56 percent of Latinx opioid-related deaths. Between 2014 and 2017, synthetic opioid-related deaths rates increased by over 800 percent among Blacks, the sharpest increase among all races and ethnicities.37

Black individuals with opioid use disorder often have less access to the full range of medication-assisted treatment options available in comparison to Whites. While both buprenorphine and methadone are effective treatments, buprenorphine is often considered a less stigmatizing and disruptive option. Methadone treatments require daily visits to methadone clinics, mandatory counseling and regular and random drug testing. In contrast, buprenorphine is an office-based treatment that can be administered by a primary care physician. However, studies have shown that methadone clinics are most common in low-income areas with greater proportions of people of color, while buprenorphine treatment is most accessible in residential areas with more White, higher-income patients.38 Buprenorphine treatments are most often paid for either out-of-pocket (40 percent) or by private insurance (34 percent), while Medicare and Medicaid only accounted for 19 percent of visits.39 Although most Medicare Part D plans included buprenorphine treatments, as of 2018, 65 percent of these plans have some sort of restricted coverage for this medication.40 This further creates disparities in access for Black older adults who rely on Medicare for health coverage. Even though both Blacks and Whites experience similar rates of opioid use disorder, White patients were 35 times more likely to receive a buprenorphine prescription than Black patients.41

Falls are the leading cause for fatal and non-fatal injuries for older Americans.42 According to Community Assessment Survey for Older Adults (CASOA) survey results, in 2017, 28% of Central Indiana seniors reported falling or injuring themselves in their own homes, highlighting the need for fall prevention programs targeting interventions for risk factors. While deaths from falls for older adults have risen nationally, we cannot reliably say the same for Indiana based on the available data. See the Aging in Place chapter for further detail.

Obesity is a complex health condition with several causes and contributing factors. These include behavioral factors like eating habits, inactivity, medication use and other environmental exposures (social media, pollution, chemicals etc.) In Central Indiana, across all racial and ethnic groups, Blacks and Whites have the highest rates (25% and 21% respectively) among the CMS beneficiaries.

Diabetes is a chronic condition that requires careful management and continuous support to avoid complications such as heart disease, eye and vision problems, kidney disease and nerve damage. Although the burden of diabetes is often described in terms of its impact on working-age adults, diabetes in older adults is linked to higher mortality, reduced functional status and increased risk of institutionalization.43 In Central Indiana, diabetes rates in older adults remained stable from 2013 to 2018 among CMS beneficiaries, though rates for people of color have been persistently higher.

It is important to note that socioeconomic and lifestyle factors both have a large influence on chronic disease and disability trends. Risk factors include smoking, obesity, diabetes, hypertension and mental health conditions (depression, Alzheimer’s disease, anxiety). Socioeconomic factors, such as employment rate, available jobs, increasing earning inequities and rises in full retirement age, can each explain some of the fluctuation in reported disability and chronic disease incidence rates.