Food insecurity is a challenge for many older adults with low incomes. Nationally, one in ten households are food insecure, and the rate is even higher in Indiana.
Download PDF
Download Data 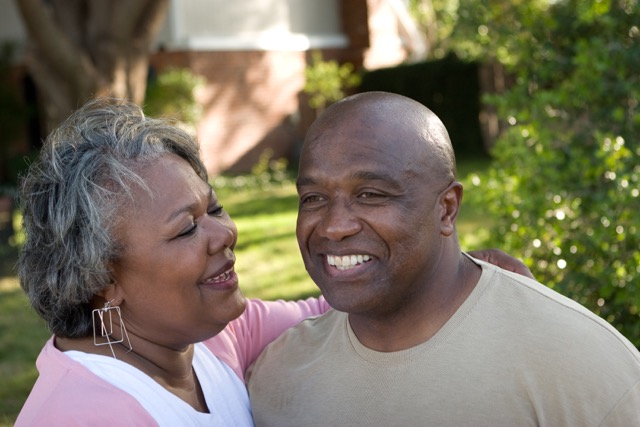 Esther and Raymond are married Black couple living in a neighborhood on the near-northeast side of Indianapolis. Raymond is 72, and Esther is 70. Both are retired. Raymond was a maintenance worker. Esther didn’t work outside the home when their children were growing up. Once they moved out, she worked as a program assistant in a nonprofit agency near her home. Esther and Raymond’s annual household income is $34,000 all of which comes from Social Security benefits. They have retirement savings of about $40,000.

Two years ago, Esther was diagnosed with diabetes and began taking medications for it. At the time, her doctor also recommended lifestyle and dietary changes to slow the progression of the disease. With Raymond’s encouragement, she began walking more and created a meal plan to incorporate more fruits and vegetables into their meals. Lately, however, financial struggles have made it difficult to stick with the plan. One of their children needed help with an unforeseen expense, and a leak in their roof needed required repairs. Then a mechanic told them that their car needs a new transmission and is currently unsafe to drive—but they are postponing the repair work until their financial situation stabilizes. To make ends meet between Social Security checks, Esther and Raymond recently visited the food pantry of a nearby church and received a week’s worth of food. It was the first time they had relied on a food pantry.

Several years ago, the chain grocery store they liked to shop at—just two blocks from their home—closed. The nearest grocery is now more than two miles away. It takes about half an hour to reach on public transit. Because of their car situation, they have begun buying food mainly at a local convenience store. The only produce it stocks are bananas and apples. Mostly, Esther and Raymond buy frozen, prepared meals. They can also get a week’s worth of food once a month from the church pantry. If their old grocery store were still open, they would walk to it and buy fresh produce. Now, they worry that the lack of access to fresh produce and other nutritious food on a regular basis is putting them on a path toward negative health outcomes.

Food insecurity is a challenge for many older adults with low incomes. Nationally, one in ten households are food insecure, and the rate is even higher in Indiana. This section of the report discusses the breadth of food insecurity among Central Indiana’s older adults, including food access and barriers to food security. Key findings include:

The U.S. Department of Agriculture (USDA) defines food insecurity as households not having the resources for enough food at some point during the year. In 2021, 10.2% (13.7 million) of U.S. households were food insecure, a significant decline from 2018 (11.1%).1 This is the fourth year in a row the food insecurity rate dropped below the 2007, pre-recession level. The rate peaked at 15% in 2011.2 Nationwide, while adults ages 50-59 and age 60 and older experience lower rates of food insecurity (10.4% and 6.8% respectively) than the general public, their food insecurity rates are still greater than in 2007.3 4

In 2022, America’s Health Rankings Senior Report ranked Indiana as 42nd in the nation for enrollment in the Supplemental Nutrition Assistance Program – only half of adults age 60 and older who experience poverty participate in the program.9

Survey responses related to food and nutrition are mixed. In 2021, the share of older adults in Central Indiana who report the availability of affordable, quality food in their communities as excellent or good fell to 52% (compared to 63% in 2017), according to the CASOA survey. Twenty percent of older adults stated that having enough food to eat was at least a minor problem, marking a five percentage point increase since 2017. In 2013, this rate was only 5%.10

In Marion County, the percent of older adults living in a food desert decreased from 18.1% to 16.9%. Hancock County decreaed from 3.4% to 1.0%, also marking improvement in healthy food access. Marion County’s most severe food deserts are located in Mid-North, the northeast side, the Far Eastside, the southwest side, and the southside near Beech Grove.

Counties in the southern part of the region experienced an increase in their population within food deserts. However, this is because as more rural areas urbanize, the definition of food desert becomes stricter. In rural areas, a grocery store within 10 miles is considered close access, while in urban areas that distance is shortened to one mile. With the release of the 2020 census, more census tracts in the southern suburbs were defined as urban. As a result, Shelby County increased from 5.3% of older adults living in a food desert to 13.3%, and Johnson County increased from 4.8% to 7.0%. Within these counties, food deserts tend to be located in the towns and cities of Greenwood, Frankling, Edinburgh, and Shelbyville. 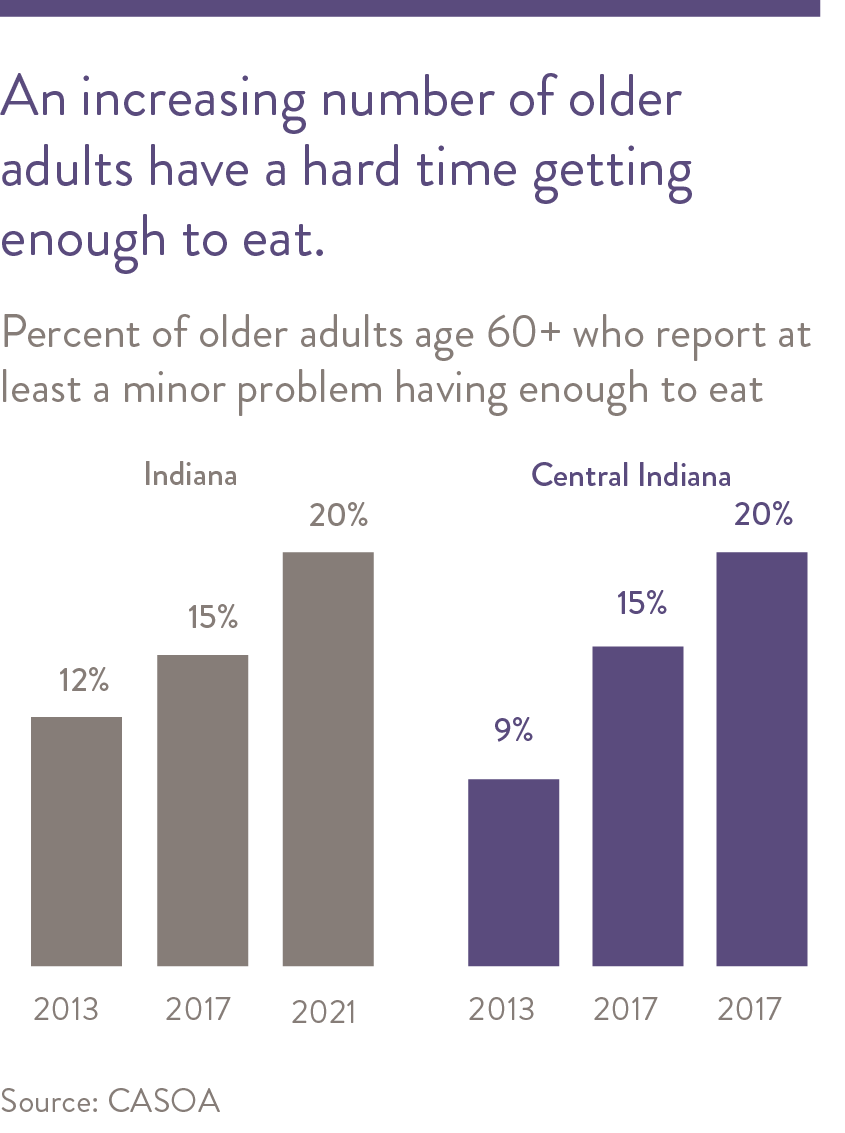 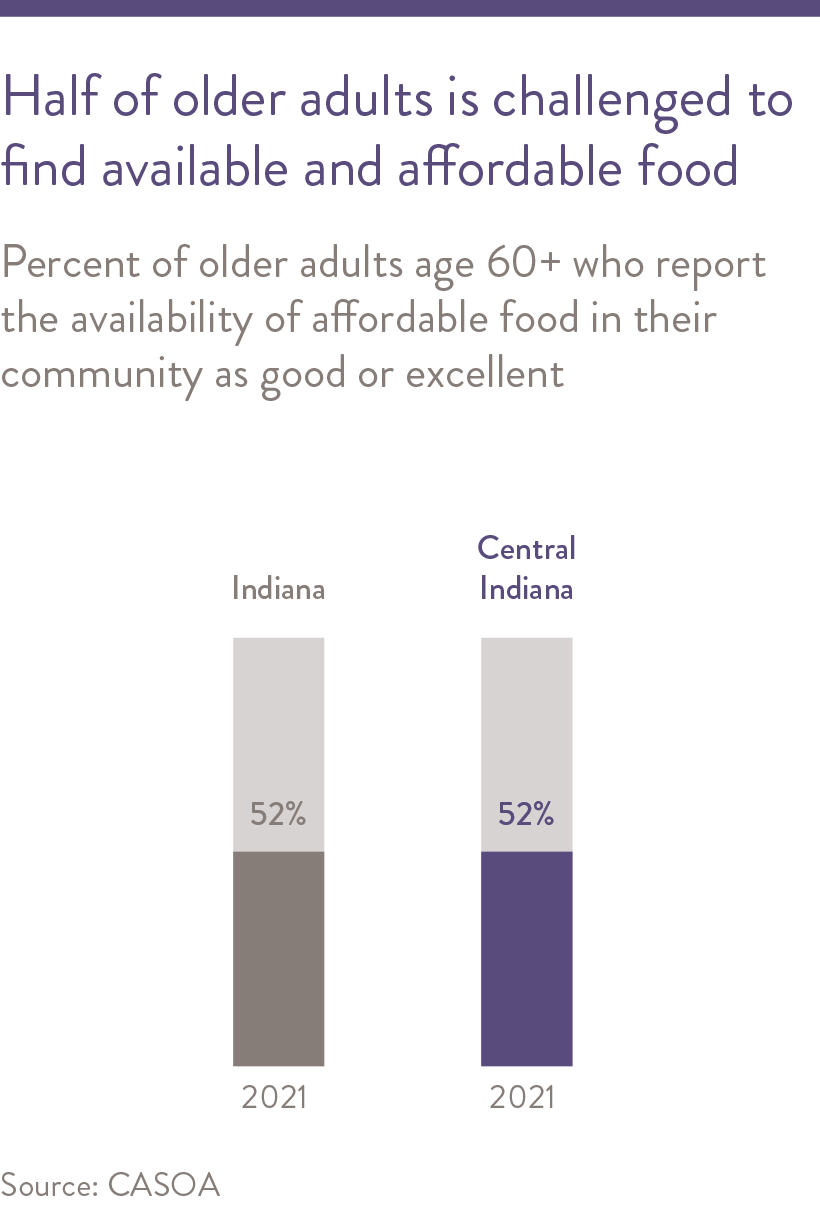 Indiana households experiencing hunger have the option of dialing 2-1-1 to connect with needed services. Between Jan. 1, 2020 and Dec. 4, 2022, there were 3,792 calls to 2-1-1 from Central Indiana adults age 60 and older requesting assistance obtaining food or a meal.11

This is a slight increase compared to 2019 (165 calls per month compared to 147 calls per month). Assistance with SNAP applications accounts for the largest increase in specific needs. In 2019, this need did not fall within the top five needs for older adults, but since 2020, it is the second most frequent food-related needs. 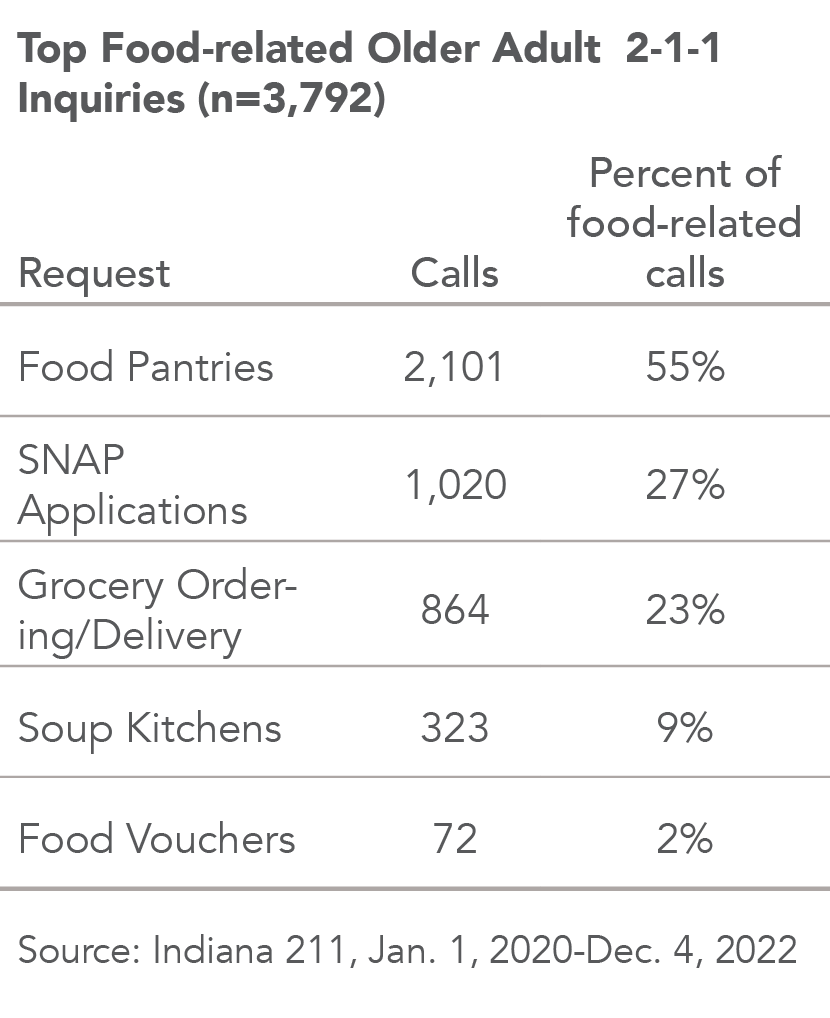 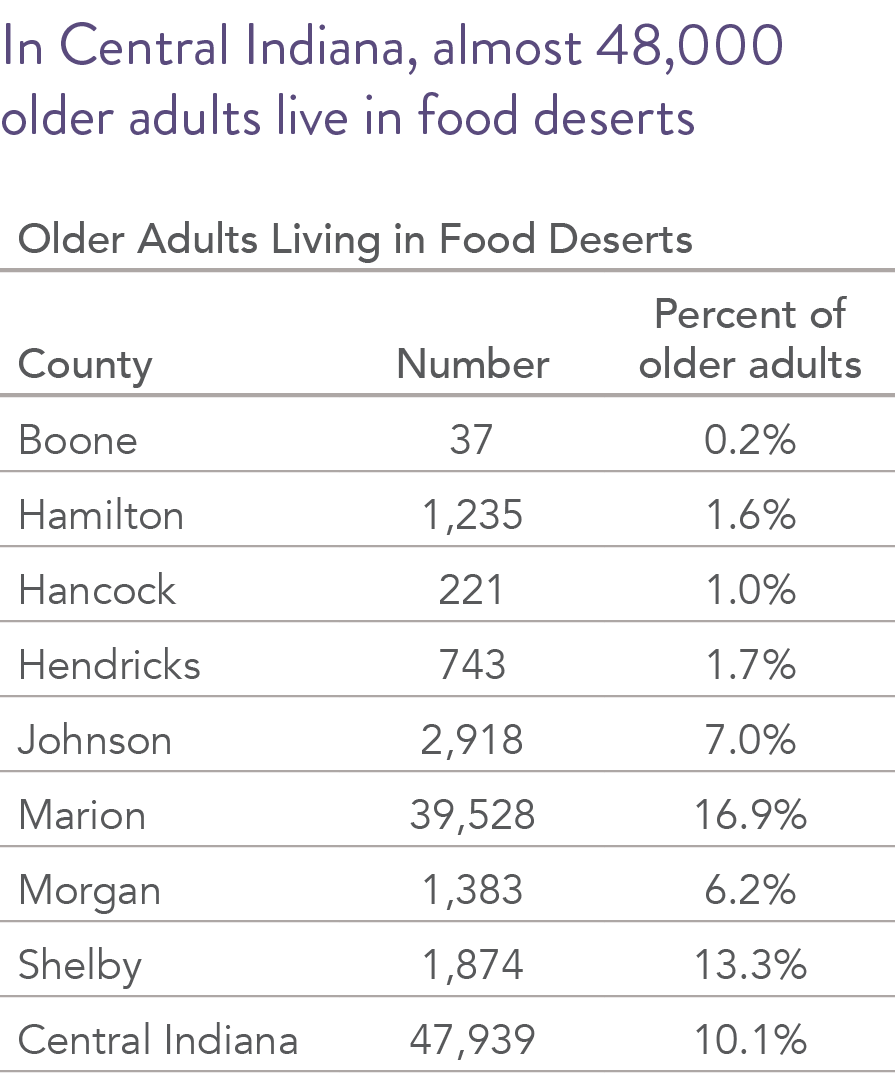 A variety of factors influence the prevalence of food deserts, particularly in urban areas.

Large supermarkets, which are more likely to be found outside city centers and on thoroughfare roads, have been shown to stock greater amounts of fresh, healthy foods at lower costs. In contrast, smaller grocery stores and convenience stores that are more common in urban areas typically stock a larger proportion of processed, high-fat foods.12

As more people settled outside the city limits at the end of the 20th century, supermarkets began to primarily build new stores in suburban areas.13 The resulting lack of new supermarket development in urban areas may also be a result of the demographic and socio-economic composition of the neighborhoods most in need of healthy food options. Neighborhoods with higher concentrations of people of color or people experiencing poverty are most likely to have low food access.14 Because these populations already face barriers such as low incomes and high unemployment rates, supermarkets and grocery stores may find that these neighborhoods cannot economically sustain new locations.15 Some food policy experts believe that negative stereotypes of crime and poverty in Black neighborhoods, as well as perceived challenges in hiring and retaining employees, may cause supermarkets to avoid opening stores in these neighborhoods.16 In fact, analyses have shown that at equal levels of poverty, majority-Black census tracts have the fewest number of supermarkets compared to majority-White, majority-Latinx, or integrated neighborhoods.17 This lack of access to healthier food options further exacerbates health disparities among Black older adults and other older adults of color.

Another factor contributing to inability to access food among urban residents is a lack of transportation to grocery stores. As larger supermarkets are built outside the city and smaller neighborhood grocers close, affordable, healthy food is only available to those who have access to a car or public transportation. In urban food deserts, the percentage of households without access to vehicles is significantly higher than in other urban areas.18 This need for transportation presents specific challenges for older residents in food deserts, as they may face physical limitations when driving, walking or using public transportation. Additionally, they may not be able to afford the travel expenses associated with going to a grocery store.19 Older adults in urban food deserts who do not own a vehicle were 12 percentage points more likely to report food insufficiency than older adults in the same areas that did own a car.

Although many older adults experience food insecurity while living on fixed incomes, they are less likely to participate in the Supplemental Nutrition Assistance Program (SNAP) than younger adults.20 One potential explanation is that limited access to and affordability of transportation to grocery stores and supermarkets diminishes uptake of SNAP benefits among this age group. As a result, older adults are more likely to rely on meal delivery programs like Meals-On-Wheels.21

Both service providers and older adult focus group participants indicated that hunger is a function of both money and access to transportation. An important barrier to obtaining enough food is transportation. In more than one focus group, participants indicated that they have the means to purchase food, but they are sometimes unable to access it due to lack of transportation: “I don’t need to go to the [food] pantry. I just need to go to the store.” One focus group mentioned that the senior center bus that takes them to the grocery store only does so sporadically, due to lack of funding. Older adults clearly see the linkage between lack of transportation and food insecurity in their lives.

According to service providers, many older adults use food pantries as an additional source of food to avoid going hungry between social security payments. There are 311 organizations providing emergency food programs all throughout Central Indiana. These programs include food pantries (190 programs), food vouchers (107 programs) and packed lunches (8 programs). There are also over 100 programs assisting with meals in Central Indiana. These include congregational meals, soup kitchens, meal vouchers and home delivery of meals. CICOA Aging and In-Home Solutions (CICOA), the area agency on aging serving the SoAR geographic area, is the largest organization providing meal assistance for older adults. CICOA assists seniors through multiple programs, including:  1) frozen meal delivery for home-bound individuals 60 and over; 2) neighborhood congregational meals at over 20 locations; and 3) a voucher program that allows individuals 60 and over to purchase discounted meals at 11 hospital cafeterias and restaurants. These CICOA programs have a suggested contribution of $3.00 per meal.

When asked if they are impacted by food insecurity, focus group participants conveyed different experiences. Some said this was not a problem, while others indicated they can always use extra food when it is available. A variety of opportunities to access additional food were mentioned. These include food pantries and hot prepared meals at senior centers or through Meals on Wheels. Other focus group participants communicated they were unaware of food assistance programs.

Food insecurity and low food access among older adults are influenced not only by cost and availability of healthy food, but by their ability to access it. Access is affected not only by availability of transportation to stores and food pantries, but also by whether the individuals in need are aware of the services that are available. The recent efforts to improve food access among some of the most food insecure neighborhoods in Marion County may help reduce this problem, if used by those in need.