Overall, between 2014 and 2019, the median household income of older adults in Central Indiana increased, from $47,000 to nearly $55,000. All three age groups experienced significant gains in median household income between 2014 and 2019, marking economic recovery following the Great Recession in 2008. Not all populations are equally impacted by these gains, however; while White older adult households achieved increases in income over this five-year time period, neither Black nor Latinx older adult households experienced statistically significant gains.6 7

Focus groups of older adults reported experiencing poverty throughout their lives and continuing to lack financial stability, despite years of employment.10

Key informant service providers discussed difficulty and low success rates employing those who continue to experience poverty.11 This suggests that if poverty rates are high among younger-old adults while many are still employed, they may not be able to improve their incomes when or if they retire.

To learn more about some of the factors that influence higher poverty rates among Black older adults, please read “Highlighting Equity” below. 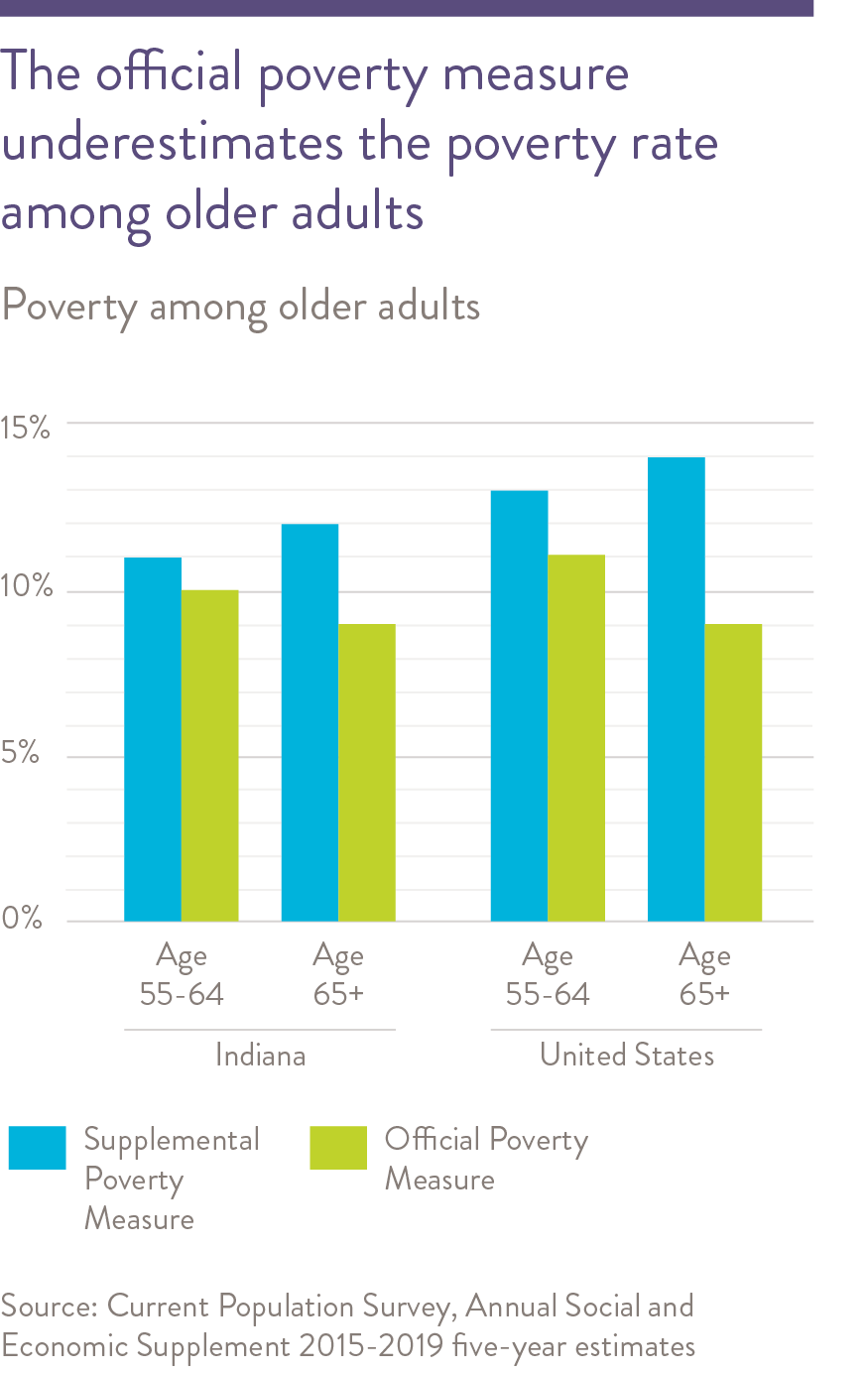 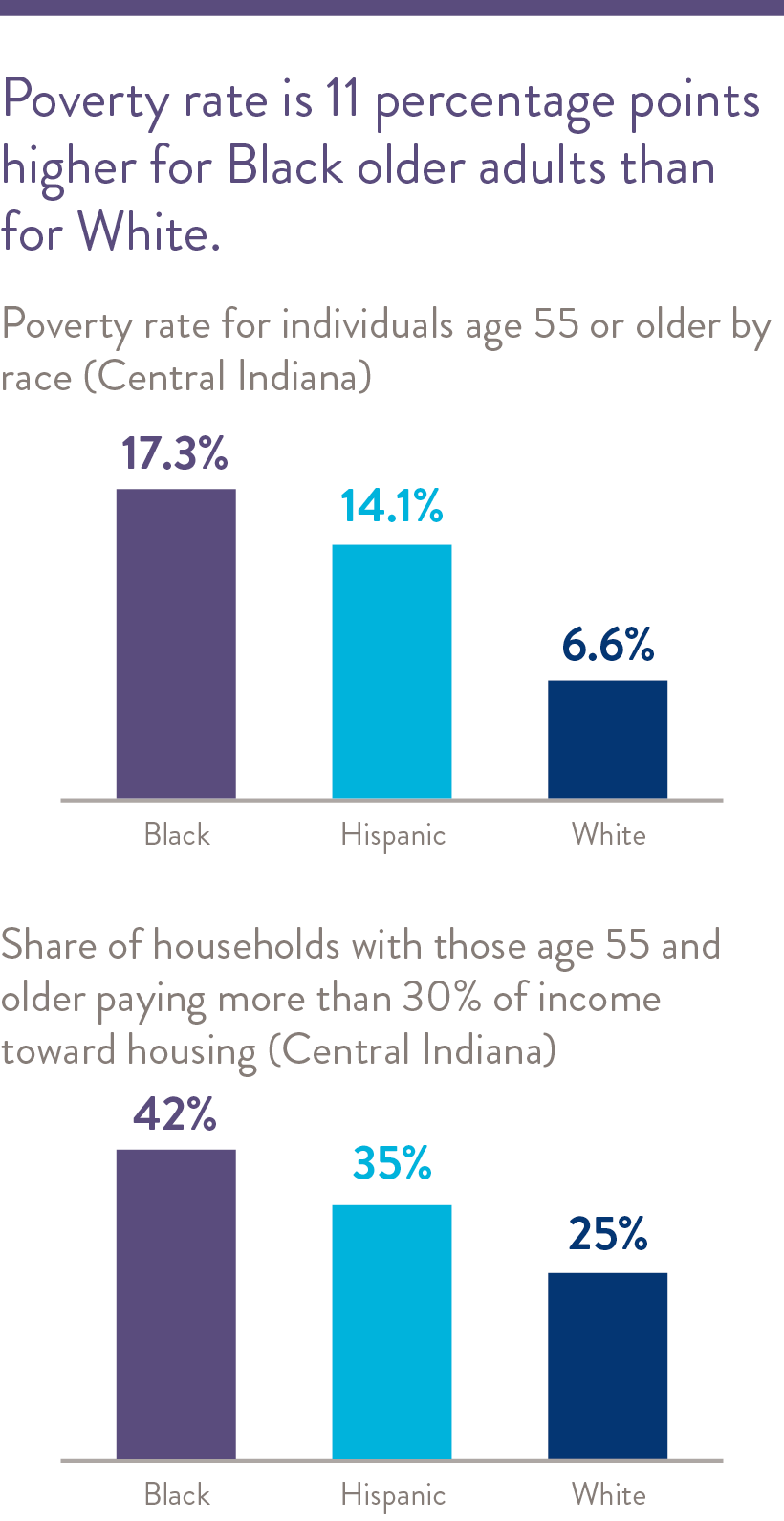 Disparities in Incomes and Wealth

Black workers are paid less than their White counterparts

The 2017-2019 Current Population Survey (CPS) found that Black workers in Indiana earned 79 cents for every dollar earned by White workers in the state.16 Additionally, a national sample of 1.8 million employees between 2017 and 2019 found that Black workers continue to have lower earnings than White workers even when possessing the same level of education and experience.17 Because of this disparity in pay and discretionary income, it is difficult for Black adults to save and accumulate wealth over their lifetimes.18

Community factors: Black adults are less likely to own their homes

In the United States, homeownership is an important avenue for building wealth.21 However, in response to the Federal Home Loan Bank Board in the 1930s, mortgage lenders and banks started to deny access to credit to purchase a house in majority-Black and low-income immigrant neighborhoods, as these areas were deemed to be “Hazardous“ for investment processes.22 As a result of these practices and other financial inequalities, Black adults are 40% less likely to own their own homes, and thus have less equity and wealth to pass on to their heirs.23 In 2019, the median net worth of a U.S. White family with a head of household 55 and older was $315,000, nearly six times greater than that of the median Black family in the same age group ($53,800).24

The National Labor Relations Act of 1935 allowed the federal government to endorse union groups that excluded Black workers from membership. This policy affected the ability of Black workers to obtain blue-collar jobs, further exacerbating the income and wealth gap.25

Employment opportunities are crucial to the financial stability of many older adults—19% of adults in Central Indiana participate in the labor force beyond the traditional retirement age of 65.27
Although Marion County has the largest number of working older adults in Central Indiana (95,000), it has the lowest proportion of its older adult population in its own work force (21%). Conversely, Shelby County is home to the fewest working adults (5,600), but at 25%, has the greatest proportion of older adults in the working population.

While some older adults continue to work after retirement because they need the income, according to focus group participants, some continue to work because they enjoy their jobs or do not know what they would do after retirement. Others maintain employment because of the benefits, including health insurance coverage. Private health insurance enables access to health care providers who do not accept Medicare.

Adults age 65 and older or have a disability and especially limited incomes may be eligible to receive an additional federal benefit – Supplemental Security Income (SSI) cash benefits to assist them with affording their basic needs. 30 Like the state of Indiana, in 2019, 3.6% of older adults in Central Indiana received SSI benefits, in comparison to 4.0% statewide. 31 The proportion of younger-old who receive SSI (4.1%) is slightly higher than the middle-old and the oldest-old (3.1% and 3.3%, respectively). Once older adults begin receiving social security benefits, a portion of the value of these benefits are subtracted from the standard monthly SSI payment of $794 per individual and $1,191 per couple, which has the effect of eliminating the SSI benefits for some retirement-age adults. 32 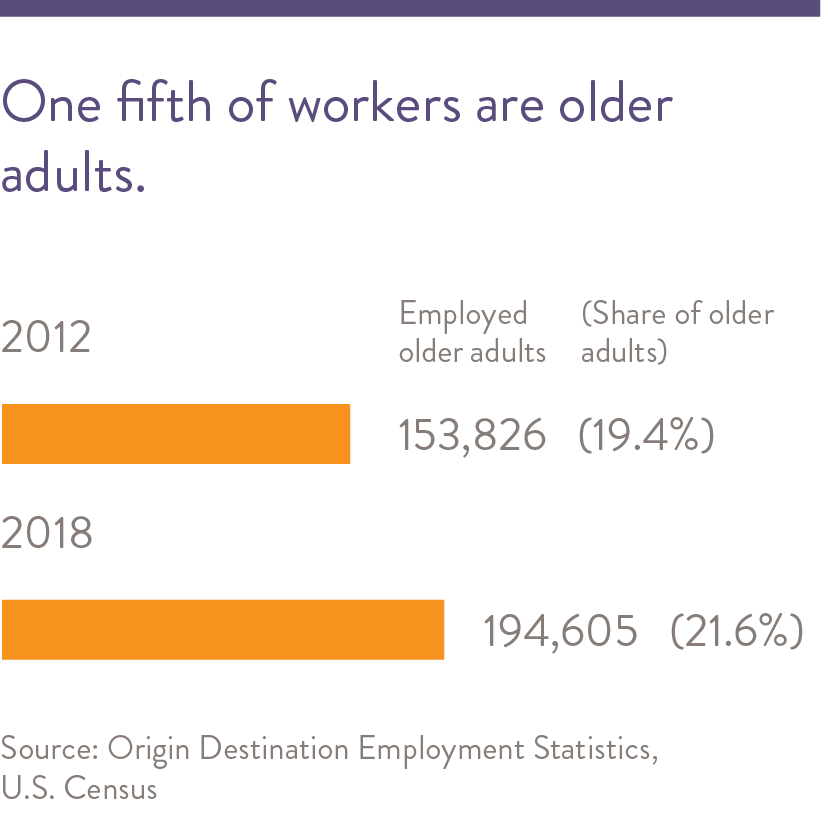 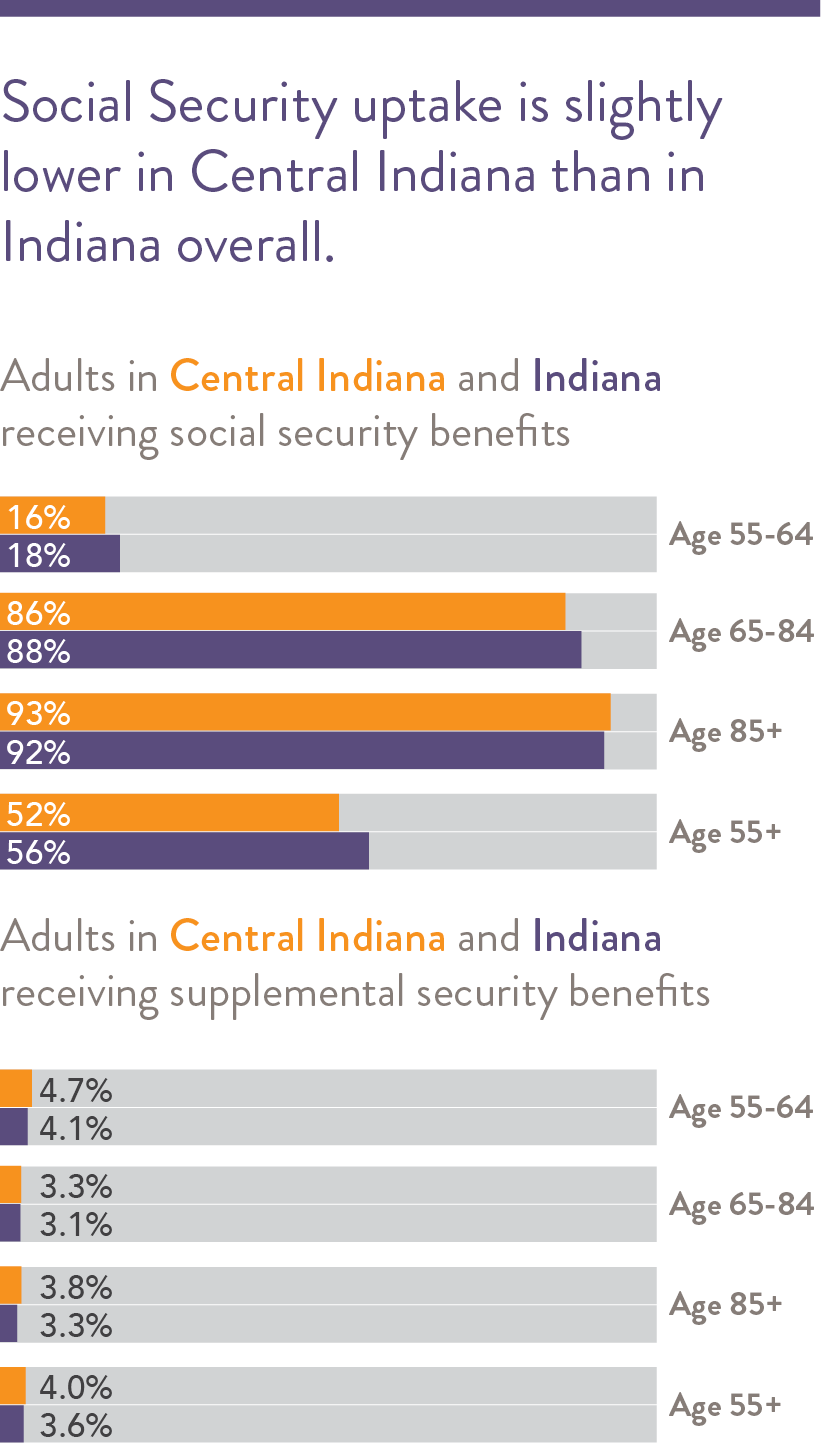 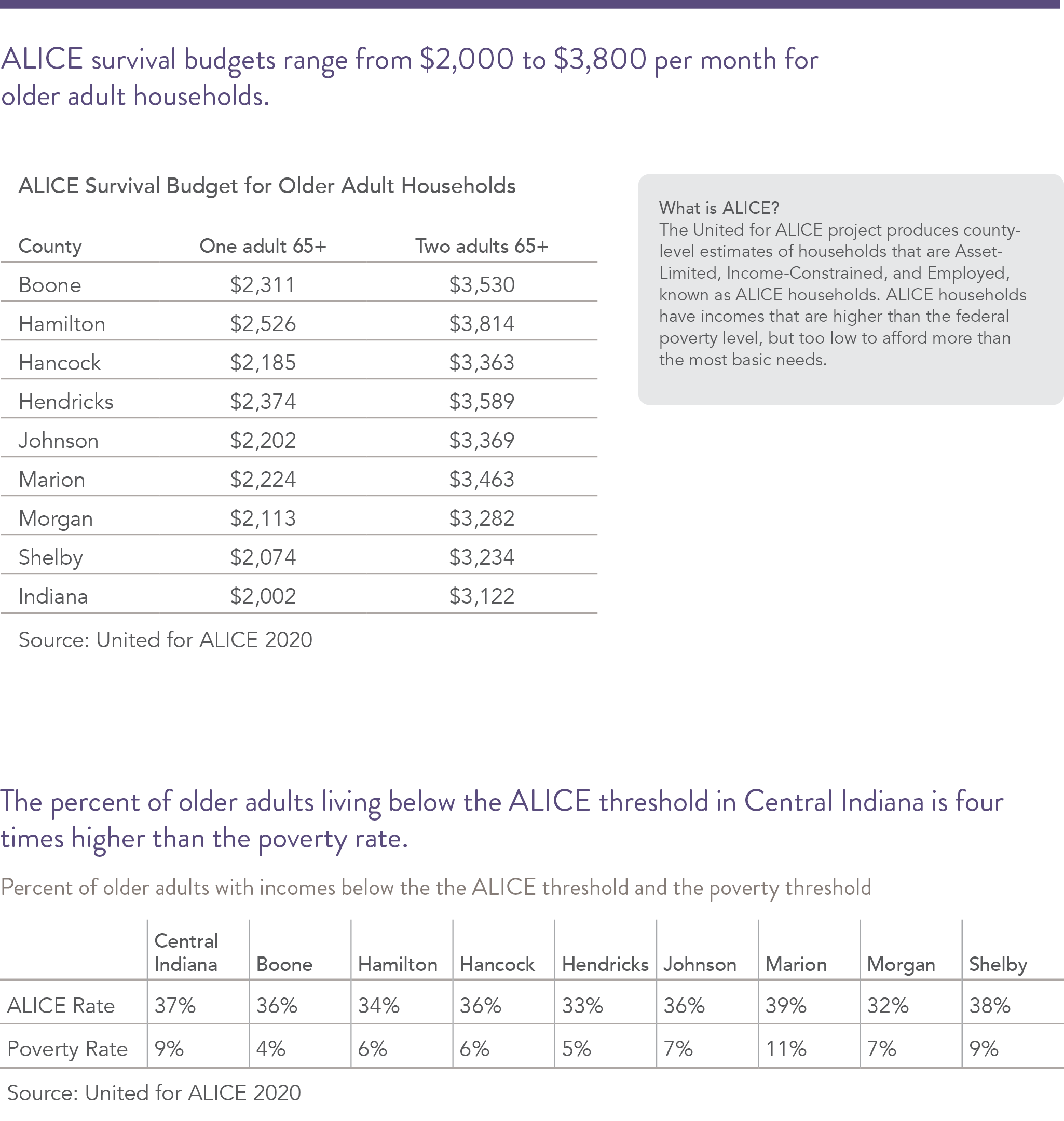 Insufficient income or poverty are not the only concerns facing older adults in Central Indiana; managing that income considering household and other important expenses is also a consideration. The United for ALICE project produces county-level estimates of households that are Asset-Limited, Income-Constrained, and Employed, known as ALICE households. ALICE households have incomes that are higher than the federal poverty level, but too low to afford more than the most basic needs. In Central Indiana, there are an estimated 13,000 adults (9%) age 65 and older who experience poverty, and more than 55,000 (37%) whose incomes fall below the ALICE threshold.33

The “survival” or most basic budget of an older adult ALICE household depends on whether it is a household consisting of an older adult living alone, or two older adults (both without children). In both cases, the budget is based upon county-specific expenses for housing, food, transportation, health care, technology, taxes and miscellaneous items. In Central Indiana, Hamilton County has the highest ALICE monthly survival budget for older adults, at $2,526 for single-adult and $3,814 for two-adult households. Meanwhile, Shelby County has the lowest ALICE survival budget for older adults, at $2,074 and $3,234. These budgets are both higher than the Indiana budget, which is $2,002 for a single older adult, and $3,122 for two older adults. Every Central Indiana county has a higher monthly ALICE survival budget than the state of Indiana overall.

In Central Indiana, one third (32%) of respondents to the Community Assessment Survey for Older Adults age 60 and older (CASOA™) reported that finding affordable health insurance was at least a minor problem for them over the past year, an improvement of six percentage points since 2013.36 37 Older adults participating in focus groups across the Central Indiana region also voiced concern about their ability to afford healthcare. To qualify for Medicare, an individual must be 65 years old, unless they are a dialysis patient or have a qualifying disability.38 The younger-old may try to access Medicaid but may not qualify based on income. Adults from this age group express frustration that qualification for Medicaid is based on gross income rather than net income, resulting in disqualification for some patients who would otherwise qualify.39

Though all older adults who participated in focus groups alluded to finances, those with lower incomes most consistently identified healthcare coverage as an issue. In addition to healthcare, specific financial management concerns involved balancing expenses such as housing, transportation, and food. Some older adults, particularly those with lower incomes, rely on monthly trips to nearby food pantries to bridge the gap between their monthly incomes and expenses. Most housing and transportation expenses are due to the cost of maintenance beyond monthly payments. These trends were especially true for older adults living in lower-income neighborhoods in Indianapolis. Survey data of Central Indiana adults age 60 and older reveals that more than one third (36%) report that having enough money to meet daily expenses was at least a minor problem during the previous year, like older adults statewide.40 41 For further discussion of housing, transportation, and food issues for older adults in Central Indiana, see those respective sections of this report.

Key informants identified that changes in Medicaid and Supplemental Security Income (SSI) policies have increased decreased the financial instability for older adults relying heavily on fixed income and government assistance programs. According to the Social Security Administration, SSI monthly payments of $794 only increased by 1.3% from 2020 to 2021, which is consistent with the December 2019 to 2020 inflation rate of 1.4%.42 43 The difference between the year-to-year change in inflation and SSI benefits is greater during years when the U.S. economy performs well, which was not the case in 2020. During years of economic growth, older adults depending on fixed incomes and government assistance programs are at risk of a notable housing-cost burden and other restrictions on finances.

Access to technology is often crucial in today’s job market as technology may be required to secure a job, perform job responsibilities, or both. For older adults, particularly those under the age of 85 who have yet to retire or are re-entering the workforce after retirement, gaps in technology skills create a substantial barrier to finding employment, especially for those who previously worked blue-collar jobs. One key informant service provider described the sense of fear that overcomes many older adults when confronted with technology, and their resistance to learning computer skills. This provider estimated that 90% of the program’s primarily working-class participants possess few to no computer skills. They may also lack the skills necessary to perform well in jobs. This creates a situation in which older adults increasingly struggle to access employment opportunities which assist with affording basic needs. A survey of Central Indiana adults age 60 and older revealed that in 2017, 30% had at least some difficulty finding work while retired, a similar proportion to that of older adults across the state. 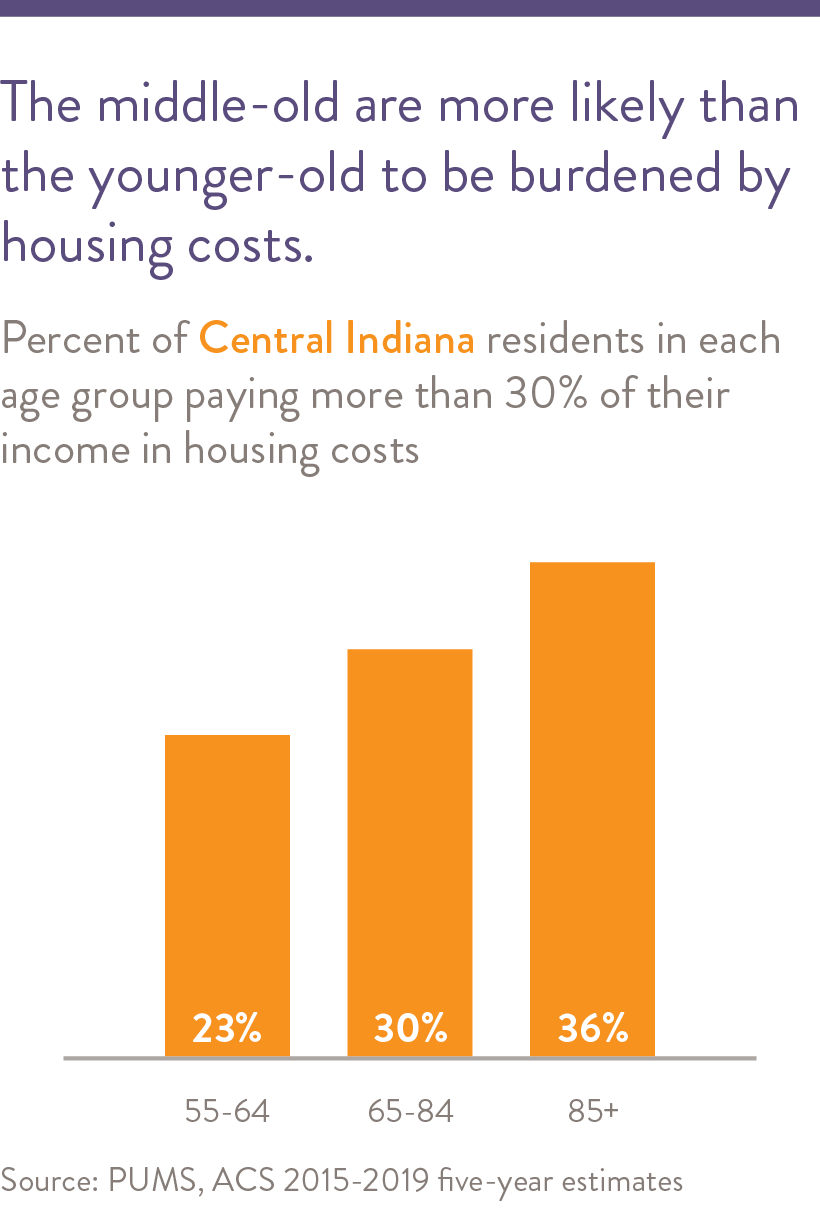 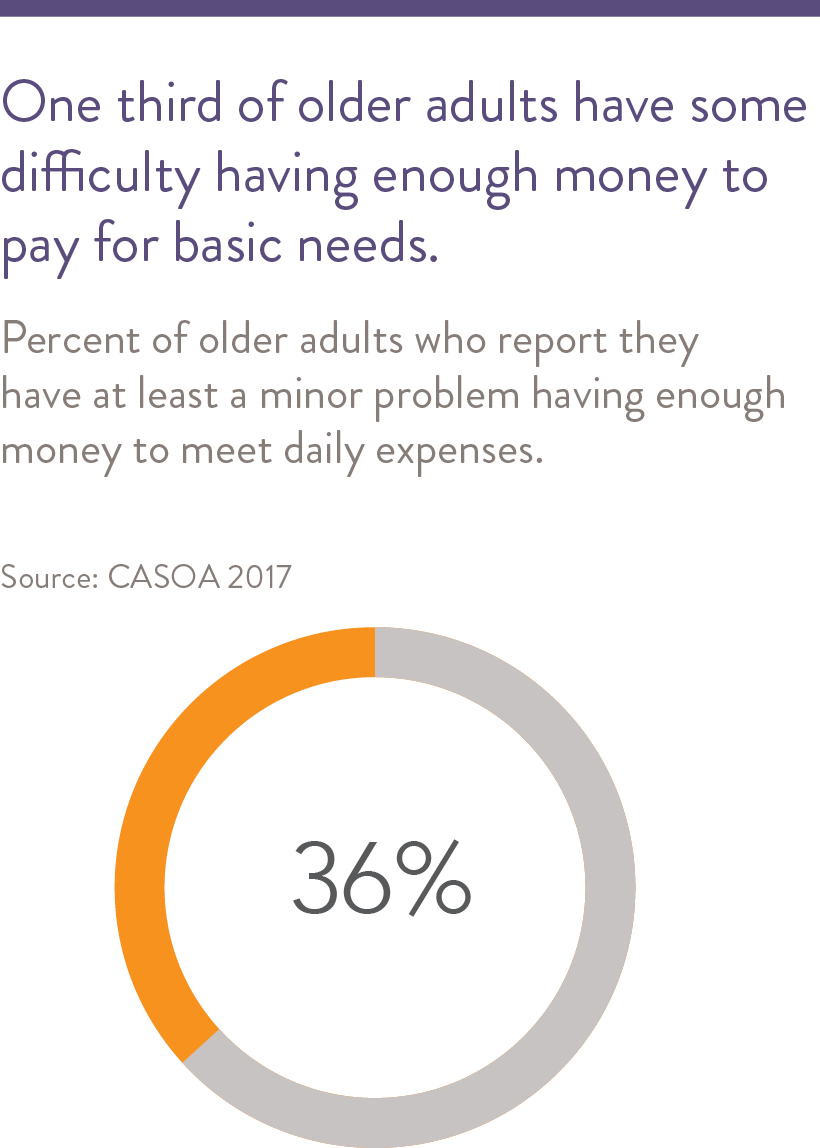 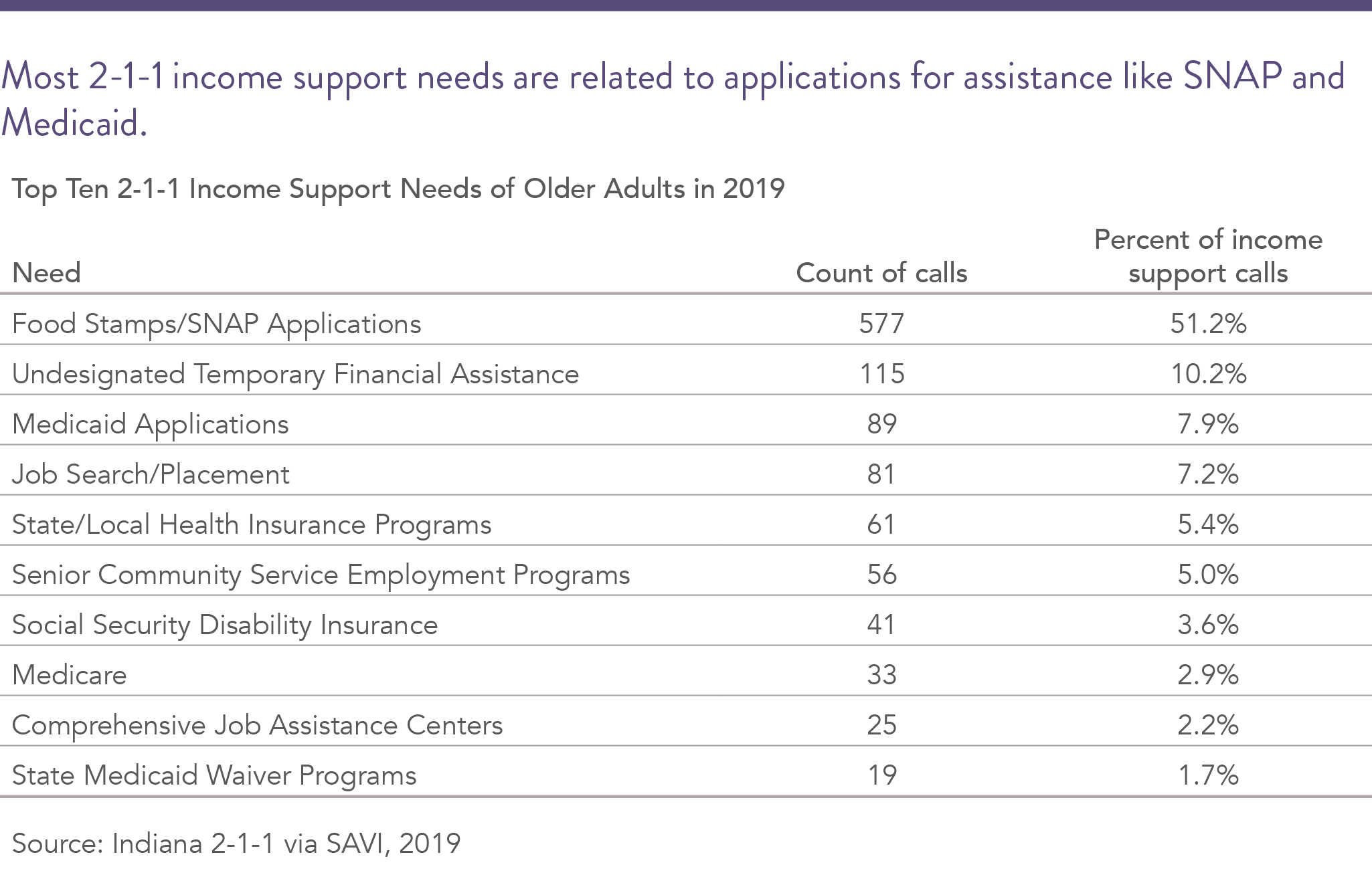 2-1-1 is a helpline service providing information and referral to health, human, and social service organizations. In 2019, there were 1,126 calls to 2-1-1 from Central Indiana adults age 55 and older requesting assistance with income support.44 The ten most frequently requested types of assistance included two that specifically target the needs of older adults—senior community service employment and Medicare. These requests for senior services represented a relatively small percentage of calls, 5% and 2.9%, respectively. In contrast, over half of all requests from older adults were for assistance with application for the Federal Supplemental Nutrition Assistance Program (SNAP), indicating that food insecurity is of great concern to older adults experiencing financial instability.

The map below represents the number of income support calls per 1,000 older adults across Central Indiana. The ZIP codes with the greatest rate of support calls are in Marion County, in neighborhoods with larger populations of people of color and higher poverty rates.45 These include Indianapolis neighborhoods such as the Near Northwest, Martindale-Brightwood, the Near Eastside, and the Far Eastside.